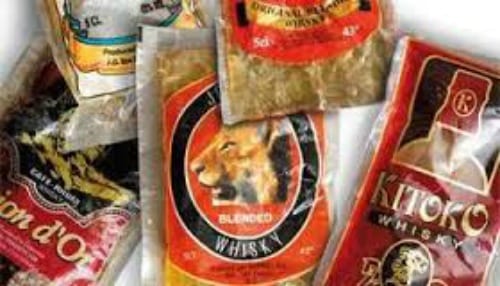 Cameroon (Face2FaceAfrica) Through the Technical Sub-Committee of Standards and Quality Agency, President Paul Biya has banned the manufacture , distribution, consumption, and commercialization of all kinds of spirits in sachets throughout the entire republic of Cameroon. This ban also comes on the heels of another ban on the use of non-biodegradable plastic bags.

After meeting in the city of Yaounde to examine and review standards for the quality of alcohol, the Technical Sub-Committee of Standards and Quality Agency, ARNO, made the decision to ban the whisky satchets because the sachets have been found to have toxic substances that are dangerous to humans.

According to Noumessi Clement, a member of the Technical Sub-Committee, “The problem was all over the country, where people are drinking spirits found in plastic containers, which is not good for human consumption. So henceforth, they will be banned on the market.”

Experts and specialists say spirits in sachets contain 45 percent of alcohol. The methanol used in the fabrication of the whisky is too high and the effects on the brain are devastating.

Therefore, by the end of the evaluation meeting, the manufacturers of spirits in sachets unanimously accepted to halt production.

“If the state of Cameroon bans it, then I agree with what my state has decided. I will no longer go in to production. It is a good thing,” said Njohita Choukwango, one of the leading producers of spirits in sachets.

In Cameroon, the consumption rate of alcohol is alarming.

According to a 2011 World Health Organization Global Status Report on Alcohol and Health, Cameroon ranked 10th in Africa, with an average Cameroonian consuming 7.6 liters of pure alcohol every year. In addition, a recent study revealed Cameroon as one of the continent’s top drinkers with 2 million liters of alcohol consumed every year.

What’s more, children as young as 10 to 17 years old are seen on the streets consuming the liquor. The case is even worse with motor bike riders, and to a certain degree, pregnant women who consume it at high rates, according to a local vendor of the product.

“I have a store and I sell a good number of them especially to youths and women. To me, it is very surprising that women consume the product more than men.”

Several factors account for this: in Cameroon there is no legislature that regulates the sale and consumption of spirits. Second, alcohol is affordable because the products are very cheap. With as little as 50 Central African Francs, (approximately $1 USD) just about every one can afford it.

Since the banning decision, anxiety has been rising among heavy consumers of these products who are against the ban. In fact, some people are still seen on the streets consuming the banned liquor. According to this class of consumers, once they consume the spirits, it enables them to forget their worries and difficult socio-economic situations.

And their reactions on the ban are as diverse as the numerous brands that are sold on the market, “If they are banning it, it therefore means that they are looking for war because when we consume it, we forget about our sufferings,” one heavy consumer expressed to Face2Face Africa.

A lady said, “We do not have much money to buy big bottles of whisky, which are very expensive, but with just 50 Central African Francs, one can get a sachet.”

Some Cameroonians who support the ban, though, say, “The decision by the Government is good for the public. There is nothing that one does that cannot be stopped for the benefit of society.”

Another added, “It is good to stop it because there are some people who have taken it as food, which is not good for their health.”