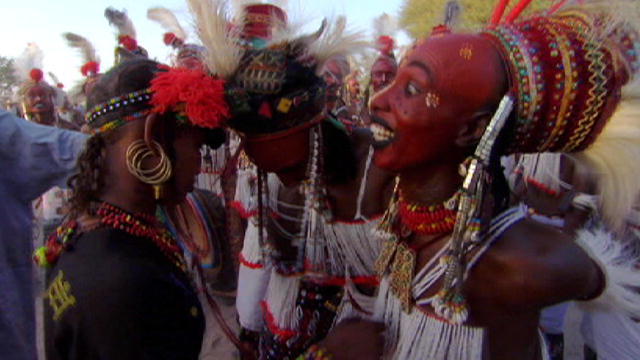 During a wife-stealing ceremony in the Sahel region. Photo credit: Nigeria Daily News

Wife stealing is an annual ritual practiced by the Wodaabe tribe, a subgroup of the Fulani ethnic group found in the Sahel region. Women from this group of nomads are allowed to have as many husbands as they wish.

During the wife-stealing ceremony, which can go on for days, women are required to pick their preferred mates from a group of men who put on a spectacular mating dance with the hopes of being picked.

A woman can pick as many mates as she pleases and have sex with them before she settles on one.

This festival is considered to be the world’s most outstanding beauty pageant for men. Apart from being a hotly contested beauty parade, the wife-stealing festival is different from other pageants because it’s the women who get to pick their favorite mates.

The weirdest thing about this practice is that it doesn’t matter how long the woman has been married; once she has picked a man, the tribe accepts the new union and regards it as a genuine marriage.