Last Tuesday, tens of thousands of Ethiopians gathered at the Meskel Square in the capital Addis Ababa to celebrate the annual Meskel Festival, which commemorates the discovery of the Christ’s Cross.

Crowds of participants flocked the venue, led by priests who were dressed in their typical long white religious robes and headgears. The crowd then gathered around the bonfire and sang religious songs to mark the day.

The festival, which is commonly referred to the Feast of the Exaltation of the Holy Cross, occurs on September 27 in the Gregorian calendar and September 28 in leap years. It’s a colorful event that attracts thousands of members of Orthodox, Catholic and Protestant churches from across Ethiopia.

Meskel celebrations include burning of Demera (a mammoth bonfire) to signify the fire that was lit by Queen Eleni. It is often said that God spoke to the queen in a dream and asked her to make a large fire and use the direction of its smoke to find the location of the Christ’s Cross.

So, the queen ordered her subjects to gather all the firewood they could get to make a giant pile. She then added frankincense to the pile and lit it. A huge cloud of smoke went up high in the sky and fell back to the ground, right at the location of the cross.

Prior to the Demera procession, the firewood is adorned with flowers to signify its importance. Once burned, its ashes are then collected and used by the worshippers to mark their foreheads with the shape of a cross, just like the one done by Catholics on Ash Wednesdays.

Believers say the fire ritual cleanses them from all sins, while the direction of the smoke and the final collapse of the pile of firewood symbolize the course of future happenings.

The same ritual, which has now become a major tourist activity, was also held in the neighboring Eritrea. 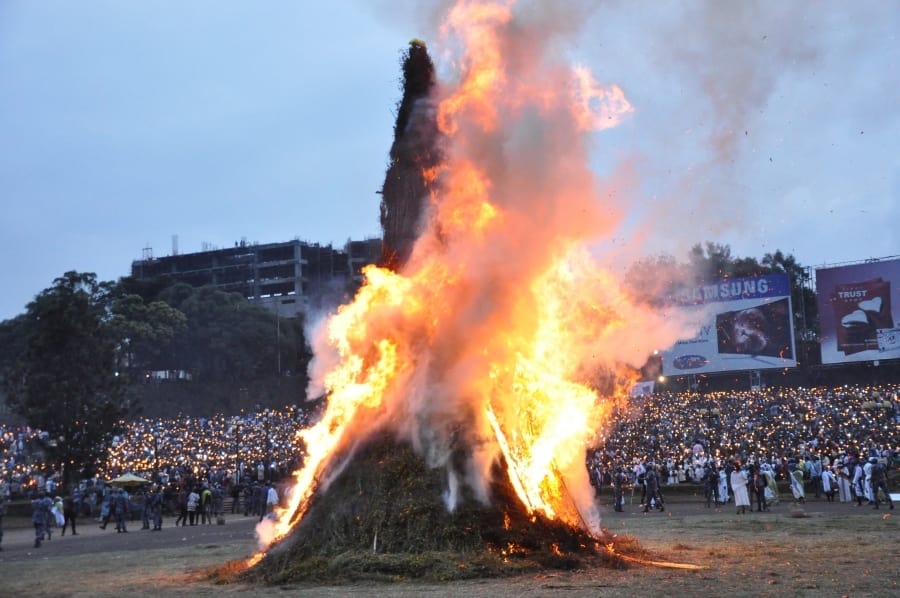 Tuesday’s Meskel celebrations happened amid rising tensions in Ethiopia, especially in the Oromia region where the people have been engaging in anti-government protests as they demand for political and economic inclusion.

The protests, which started last year, have left hundreds of people dead and thousands detained. The region also suffers periodic ethnic clashes between the Oromo people, the largest ethnic group in Ethiopia, and their neighbors from Somalia.

Less than two weeks ago, two people were killed and more than 50,000 others displaced from their homes after the two communities clashed.

Since the early 1990s, the two groups have been engaging in territorial disputes that are often sparked by drought, which forces people to move across the border in search of greener pastures.