Bloomberg reports that Dangote, Africa’s richest man with a net worth of $11.1 billion (Forbes), has coveted the team since becoming a supporter in the mid-1980s. The cement magnate said he’ll consider making a formal bid once he is done with the construction of a massive $11 billion oil refinery in Nigeria’s commercial capital, Lagos, by the end of the decade.

Dangote said that after his takeover, he will immediately fire long-term coach Arsene Wenger.

“The first thing I would change is the coach,” Dangote told Bloomberg in an interview. “He has done a good job, but someone else should also try his luck.”

Wenger is one of Europe’s longest-serving coaches. He has spent the last 20 years at the club. The French man enjoyed relative success in his first couple of years but has struggled to replicate the achievements in recent years.

The poor run of results have led to growing frustration among the club’s supporters and a call for Wenger to be sacked. However, he recently signed a new two-year deal even though the club failed to qualify for the Champions League for the first time in more than 2 decades. 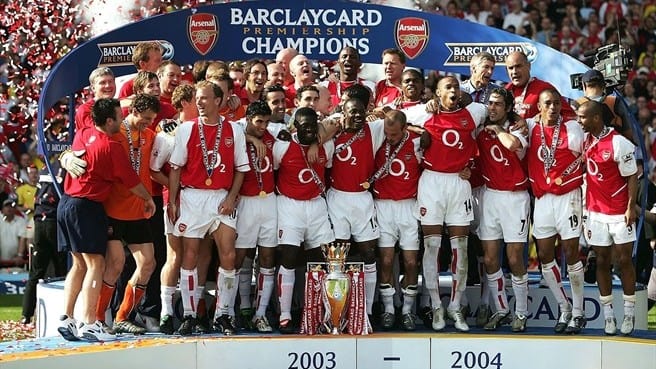 The last time Arsenal last won the EPL was in 2004.
Photo Credit: UEFA.com

Arsenal FC, which is valued at $2.6 billion, is currently owned by a group of shareholders including American billionaire Stan Kroenke, who holds a 67 percent majority stake. According to reports, he rejected a takeover bid from Russian businessman Alisher Usmanov.

Dangote is, however, confident that the shareholders will be willing to sell if the price is right.

“If they get the right offer, I’m sure they would walk away,” he said. “Someone will give them an offer that will make them seriously consider walking away. And when we finish the refinery, I think we will be in a position to do that.”

“It’s a great team, well-run. It could be run better, so I will be there,” he said. “I will wait. Even if things change I will take it.”

For many years, Arsenal reigned supreme as the most successful club in London, however they have been upstaged in recent years by city rivals Chelsea FC, which is owned by Russian billionaire Roman Abramovich.

Arsenal nevertheless continues to enjoy a huge following in Nigeria and much of Africa, with some of the biggest names in African football having played for the league.