Cole made the powerful entrance onstage for his live concert at the Barclays Center in Brooklyn, N.Y., during a leg of his “4 Your Eyez Only” tour, wearing the jumpsuit commonly worn by inmates in the American prison system, according to Billboard. He was also escorted to the stage by four men dressed to look like policemen or correctional officers.

A few days before his stage appearance, Cole, 32, took the time to visit San Quentin State Prison to meet with inmates who were serving out life sentences.

Cole’s manager, Ibrahim Hamad, shared photos of what he described as a “life changing experience,” showing the “Breakdown” rapper sitting outside of the prison yard with a group of men, and later, touring inside the actual facility. 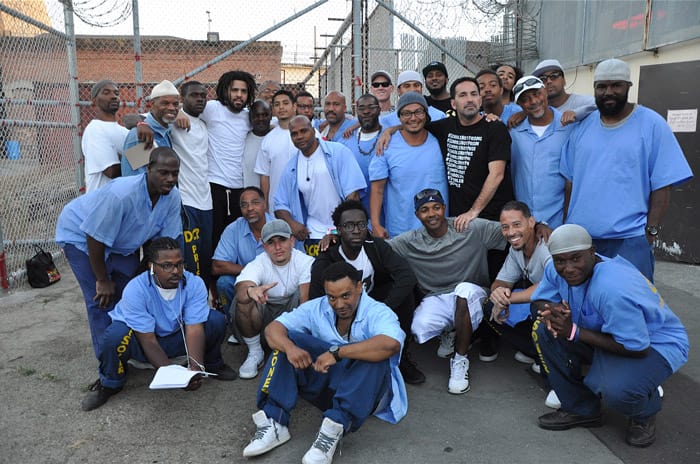 “We got the opportunity to spend the day at San Quentin State Prison talking and meeting inmates who will never see the outside again,” Ibrahim captioned the images.

“That experience was a life changing experience and wish I had the ability to put that in a caption but that wouldn’t be doing it justice.”

Cole, whose real name is Jermaine Lamarr Cole, is known for his socially conscious lyrics that often call attention to America’s dysfunctional criminal justice system — often derided as the “prison industrial complex” — which has seen the mass incarceration of Black males in a society that remains largely fractured along racial lines.

And with studies showing that African Americans are more likely to be shot by the police than any other racial group, Cole has also lent his voice to campaigns against the police brutality of people of color by law enforcement officers who are paid to protect them.

In 2016, Cole — along with fellow rappers Nicki Minaj, Pusha T, and Chance the Rapper — met with then U.S. President Barack Obama to discuss his “My Brother’s Keeper Initiative” and criminal justice reform.