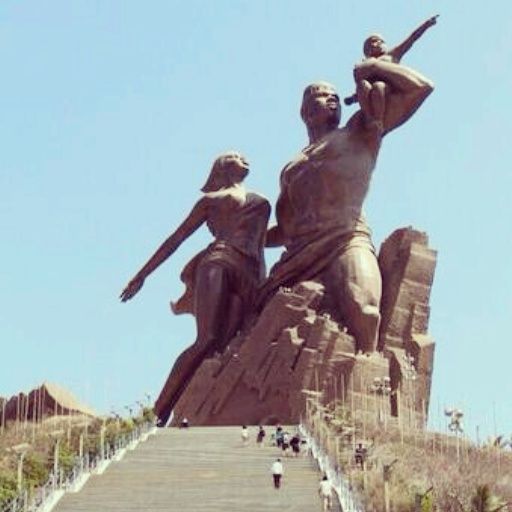 The African Renaissance Monument – SenegalKnown as the Monument de la Renaissance Africaine in French, the African Renaissance Monument stands at 161ft in the capital of Senegal, Dakar and is the tallest in Africa. The statue was designed by Senegalese architect Pierre Goudiaby after the project was presented to him by then-President Abdoulaye Wade who reigned for 12 years from 2000 to 2012. Former President Abdoulaye Wade found the project necessary as a catalyst for a new era in African renaissance.

Built by the North-Korean Company Mansudae Overseas Project, the statue cost 27 million dollars and is taller than the Statue of Liberty in the United States of America. The statue is a representation of a man, a woman and a child emerging from a volcano. It took 5 years to build the bronze statue finishing in 2010 instead of 2009 as planned.

The African Renaissance Monument was unveiled on April 3, 2010, in front of 19 African heads of state amidst drumming and dancing as part of marking 50 years of Senegalese independence. The statue stands on a hill overlooking Dakar, the Capital of Senegal and is one of the most controversial statues built facing intellectual property battles and protests by Christians and Senegalese.