Aliko Dangote, the richest man in Africa, has pledged to contribute $100 million to the ongoing fight against child malnutrition in Nigeria. The pledge was unveiled by the C.E.O of Dangote Foundation, Zouera Youssoufou, during the recently concluded Global Nutrition Summit (GNS) 2017 in Italy.

GNS is an international forum of the United Nations Decade of Action on Nutrition (UNSCN) – a commitment of Member States to undertake ten years of sustained and coherent implementation of policies and programs, following the recommendations and commitments of the ICN2 Framework for Action and the 2030 Agenda for Sustainable Development.

This year, the summit brought together a number of key global stakeholders, including the World Health Organization (WHO), U.K’s Department for International Development, Food and Agriculture Organization of the United Nations, Bill & Melinda Gates Foundation, and the International Coalition on Advocacy for Nutrition.

The pledge by the Nigerian billionaire was touted as the highlight of this year’s summit, which had brought together governments, foundations, civil society organizations, international agencies and businesses with the aim of accelerating the global fight against malnutrition.

Dangote, who is estimated to be worth $13.2 billion, promised to give the funds over a period of five years, mainly targeting the most affected parts of the West African nation.

“Nigeria’s high malnutrition rate is undermining progress towards improving child health and survival and putting the brakes on economic development. By investing in nutrition, we aim to directly improve the lives of Nigerian families and to empower our citizens to reach their full potential,” Youssoufou said at the summit.

With the $100 million contribution, Dangote hopes to reduce the current rate of malnutrition by at least 60 percent, especially in the worst hit areas, such as the North East and the North West.

According to the United Nations Children’s Fund (UNICEF), at least 2.5 million Nigerian children who are below five years suffer from Severe Acute Malnutrition (SAM) every year. SAM is an extremely fatal condition as it exposes children to serious illnesses such as pneumonia, diarrhea, Malaria, and many others. 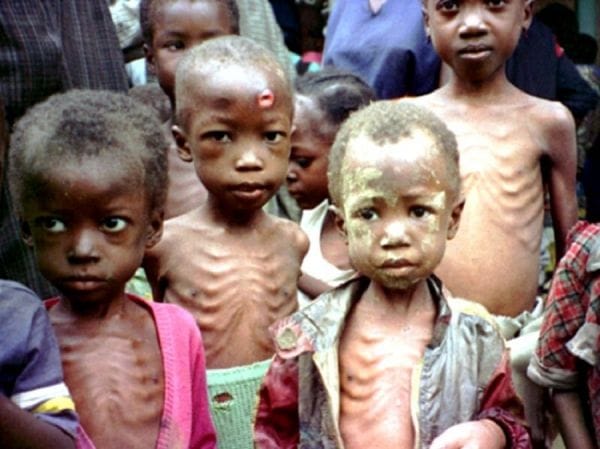 The Fund estimates that at least 420,000 Nigerian children under the age of five die every year from illnesses related to malnutrition. Chronic malnutrition also inhibits growth, leaving children with physical and mental disabilities.

“Although the problem is more widespread in Northern Nigeria, there are malnourished children in every Nigerian state,” UNICEF writes.

Last month, over 80 members of parliament from Nigeria and Burkina Faso met in Burkinabe’s capital Ouagadougou to discuss better ways of protecting children from malnutrition. The Nigerian First Lady, Aisha Buhari, is also leading a nationwide initiative, alongside the wives of state governors, to address the problem of malnutrition in the country.