With most African players enjoying football success in Europe, it is the dream of many young boys and girls to get such a chance.

It is no secret that European clubs have some of the best talents from the continent, giving young players the hope that they will make it there one day.   Such aspirations have made them look for all opportunities to showcase their prowess and be selected to such great teams.

However, the same aspirations have been used by traffickers and scammers to take advantage of the usually naive teenagers. They sell them dreams of playing in the big leagues, but it usually ends up a big fat lie.

Over the years, there have been reports of how scammers from all over the world in the guise of scouts and football agents arrive in Africa to pick the top cream for training and eventual transition into big teams.

When these teenagers arrive in Europe, they end up alone and stranded in hotels with no contract and no alternative.

Valentine Akpey ended up in Portugal in 2014 after he was spotted by a Nigerian agent while he was playing in the streets of the capital Abuja when he was barely 18.  Just a few months later, he was picked up by Portuguese authorities after his visa expired and was told to get his papers right before he was deported to Nigeria.

Fortunately for him, a club, Nogueirense gave him a contract, which saw him train and live with other players within the club’s stadium.

For Aloys Nong, who ended up in France, the story is almost the same. He was discovered in Cameroon by an agent who took him to Nice but the deal fell through after the agent asked for too much money.  He ended up sleeping in a family room with eight other boys. He said:

It was January, it was cold outside and we didn’t have warm clothes. We would go to the supermarket and would eat there. The guard would turn a blind eye as long as we didn’t take anything out of the store.

Although they were kicked out of the apartment, Nong was able to stay in France, living with relatives and eventually getting signed to a Belgian side.

According to award-winning sports writer Ed Hawkins, who published The Lost Boys: Inside Football’s Slave Trade in 2015, the lucrative nature of the business makes it easier for both the scamming agents and the African footballers to continue with the trade.    He stated that while for the agents, it was all about the money, for the African players it was all about a passage to Europe for a better life.

All these take place despite that the world football federation, FIFA, has a clause to protect minors in its regulations. 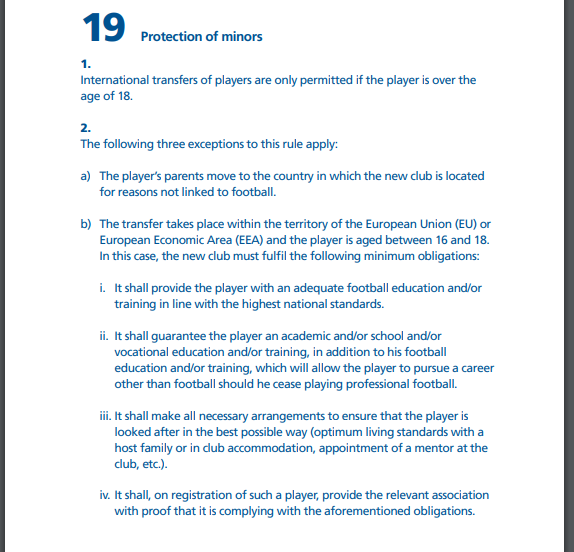 FIFA has also punished a number of federations such as the Lao Football Federation over the illegal transfer of minors. The Lao situation brought to the fore the trafficking of African players to Asia, where they face similar if not worse experience.

The trafficking of African players reared its head again in the 2018 World Cup when Nigerian fans found themselves stranded in Moscow after scammers lied to them that they would be able to stay in Russia and start their football careers.

Previously, the agents needed to undergo tests and get accreditation with their respective national football associations.  However, a change by FIFA in a bid to bypass corruption within the football federations especially in Africa, allowed the agents to self-certify, resulting in a pool of dubious agents and the exposure of players to exploitation.

A number of anti-traffick groups have brought to attention the nature of human trafficking in football, calling for the end to the crime.

Some of the solutions brought forward include collaborations between FIFA, European football federations and African governments to tackle child trafficking. There is also the need to create awareness of rules and regulations to the youngsters to protect them from scammers.

Importantly, there is a need for Africa to improve its own football sector to make it more professional and lucrative enough to keep the players on the continent.