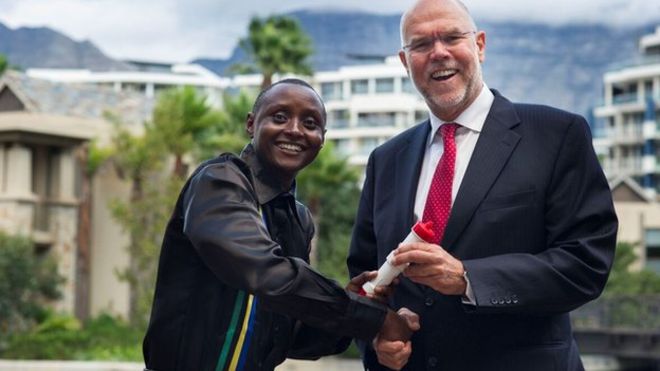 Growing up in a rural environment in Tanzania, Hilonga reportedly saw his family suffer from a host of water-borne diseases. Therefore, when he earned his PhD in nanotechnology in South Korea, he focused his efforts on creating an effective water filter.

As he researched a number of water purification solutions, Hilonga decided on using sand and nanotechnology for his filter in order to remove “99.99 percent of micro-organisms, bacteria, and viruses.”

Hilonga explains, “I put water through sand to trap debris and bacteria.

“But sand cannot remove contaminants like fluoride and other heavy metals, so I put them through nano materials to remove chemical contaminants.”

Of Hilonga’s water purification filter, Head Judge Malcolm Brinded (pictured, top right) said, “His innovation could change the lives of many Africans, and people all over the world.” 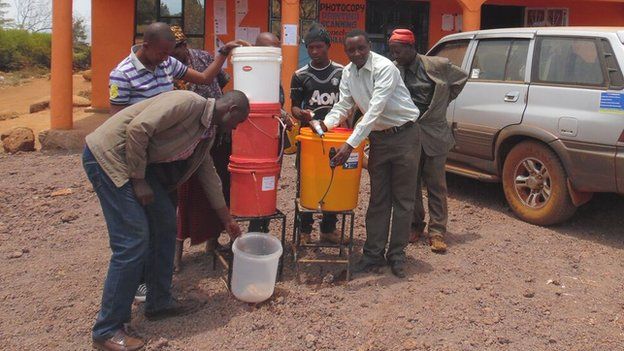 Mr. Hilonga stands next to his communal water filters.

And while the original cost of the filter was $130, the prize money of $38,348 will now enable Hilonga to buy his materials in bulk and therefore charge a lower price.

In addition to Hilonga, three runner-ups received more than $15,000, after developing their business plans for six months with the Royal Academy of Engineering, which aids African engineers in creating businesses that will solve the continent’s problems.