Over the last few years, sectarian tensions between Muslims and Christians in Egypt have risen to unprecedented levels, with churches being the main target for suicide bombers. These attacks have left hundreds of people dead, especially Coptic Christians, who are the religious minority in Egypt.

But even with the obvious danger of being attacked, Ayman William, a 41-year-old Egyptian artist, has dedicated his life to painting church murals for the glory of God, reports News24.

The self-taught artist has, for the last 15 years, painted dozens of people from the Bible, including Moses, Adam, Eve, Samson, and more.

His work can be found in many churches across the world, including Kuwait and the United States.

“God gave me a talent, and I must make use of it to serve him,” says William.

He says his inspiration to paint church murals comes from the Bible and his affinity for painting icons and murals since childhood. 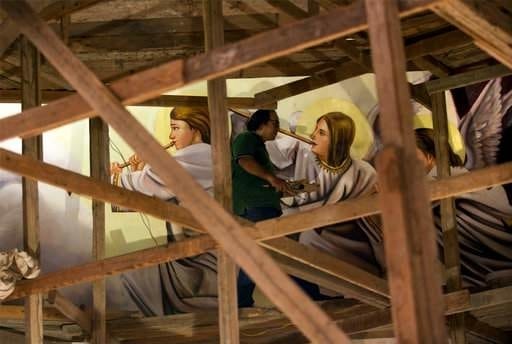 For most of his murals, William uses models dressed up in period clothing to depict specific biblical scenes.

“Besides working for payment, I believe that what I am doing is a service to the church,” William says.

The escalation of violence between Muslims and Christians in Egypt is a culmination of years of sectarian strife and ongoing religious bigotry.

Once a stable country with three stars on its flag — each representing one of the country’s three major religious communities — Egypt has now become a treacherous place for Christians and Jews. 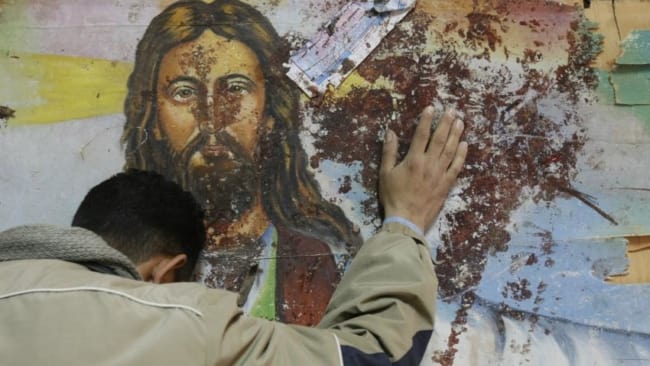 A Coptic Christian worships next to a church painting covered in blood. Alaraby

Countless Jews have been expelled from Egypt while hundreds of Coptic Christians have been persecuted over the last six decades.

The latest attack against Egyptian Christians happened three weeks ago when suicide bombers blew themselves up at two separate Palm Sunday services in Tanta and Alexandria cities. At least 44 people died in the twin attacks.

The Egyptian government has often ignored the violence against Coptic Christians, brushing aside the deep-rooted religious divisions in favor of the archaic rhetoric about national unity.

In his two-day visit to Egypt, which starts Friday, Pope Francis is expected to talk about the series of attacks against Christians and try to foster peace between the majority Muslims and minority Christians in the North African country.

His visit marks the first papal visit to Egypt since 2000.