Sudan, the world’s only surviving male northern white rhino, has announced that he is searching for a mate and heir to take his place when he dies.

Sudan has joined the Tinder dating app as part of renewed attempts by wildlife experts to make a last-ditch breeding effort to keep his species alive, the Times reports.

Experts say at 43 years (or 100 in rhino years), Sudan is clearly running out of time to find a suitable mate and father a child. The 6 foot, 2,268 kg rhino bull currently lives with two female northern white rhinos in the Ol Pejeta Wildlife Conservancy in Kenya.

Together, the three of them are all that is left of the world’s northern white rhino population.

Sadly, all attempts to mate Sudan, who enjoys a dedicated 24-hour security with his two surviving female companions, have repeatedly failed, and conservationists say they need to raise an estimated $10 million to develop an in vitro fertilization (IVF) procedure for the beasts.

To raise the money needed for the IVF procedures, Tinder and the Ol Pejeta Conservancy launched a joint campaign to give app users the option of donating when they open Sudan’s profile. 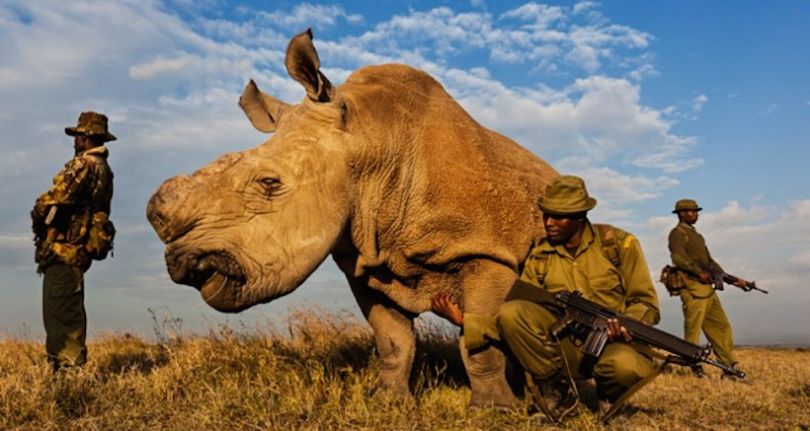 “We partnered with Ol Pejeta Conservancy to give the most eligible bachelor in the world a chance to meet his match,” said Matt David, head of Communications and Marketing at Tinder.

“We are optimistic, given Sudan’s profile will be seen on Tinder in 190 countries and over 40 languages.”

Sudan’s Tinder profile describes him as “the most eligible bachelor in the world” who likes to eat grass and chill in the mud. It says further, “I don’t mean to be too forward, but the fate of the species literally depends on me.”

Richard Vigne, the head of the Ol Pajeta Conservancy, told the BBC that an IVF procedure has never been attempted with rhinos before.

“If we get the money, the technology to achieve this will be ready by the next two or three years, and by then, we can have a new offspring from Sudan and the two female counterparts.

“The plight that currently faces the northern white rhinos is a signal to the impact that humankind is having on many thousands of other species across the planet.

“Ultimately, the aim will be to reintroduce a viable population of northern white rhino back in to the wild, which is where their true value will be realized.”