Imagine spending six days on the road biking alongside top executives, CEOs, and Brussels Airlines employees. For sure it is a once-in-a-lifetime experience, and it’s even more gratifying knowing that you are riding for a good cause.

That’s the kind of experience that Brussels Airlines — through its B. Foundation — will be offering to Americans with its North American edition of Ride for Africa, a road-biking charity trip aimed at raising funds to help provide clean drinking water and better educational programs to Africans.

The charity ride is a six-day road adventure set to take place between October 8-13, 2017, starting from Niagara Falls at the U.S.-Canada border all the way to the Brooklyn Bridge in New York City.

This will be the first edition of Bike for Africa in North America, with proceeds expected to go toward supporting the Georgie Badiel Foundation, which builds wells to provide clean drinking water to the people of Burkina Faso, and Malaika, which builds educational programs for girls, parents, and community members in the Democratic Republic of Congo.

All tax-deductible charitable contributions will be managed by the King Baudouin Foundation in Belgium and the United States. Although the ride is limited exclusively to 50 participants, Brussels has opened up the ride to 10 Belcham community members on a first-come, first-serve basis.

Bike For Africa was started in 2011 by Brussels Airlines’ philanthropic arm, the B. Foundation, with the aim of giving a helping hand to a number of non-governmental organizations and humanitarian projects that have the same passion for Africa as Brussels.

Previous editions include mountain bike rides in Rwanda and Burundi in 2011, Uganda in 2014, Senegal and Gambia in 2016, and Ivory Coast in 2017. Cameroon is set to host the next edition of this charity ride in 2018.

“Africa is an incredibly important market for Brussels Airlines and the Lufthansa Group, and as the ‘Africa specialist,’ the continent holds a special place in the hearts of all Brussels Airlines employees, which is why the company continues to give back to local communities,” says Andrea Bonaiuto, Brussels Airlines’ Marketing and Online Sales manager in North America. 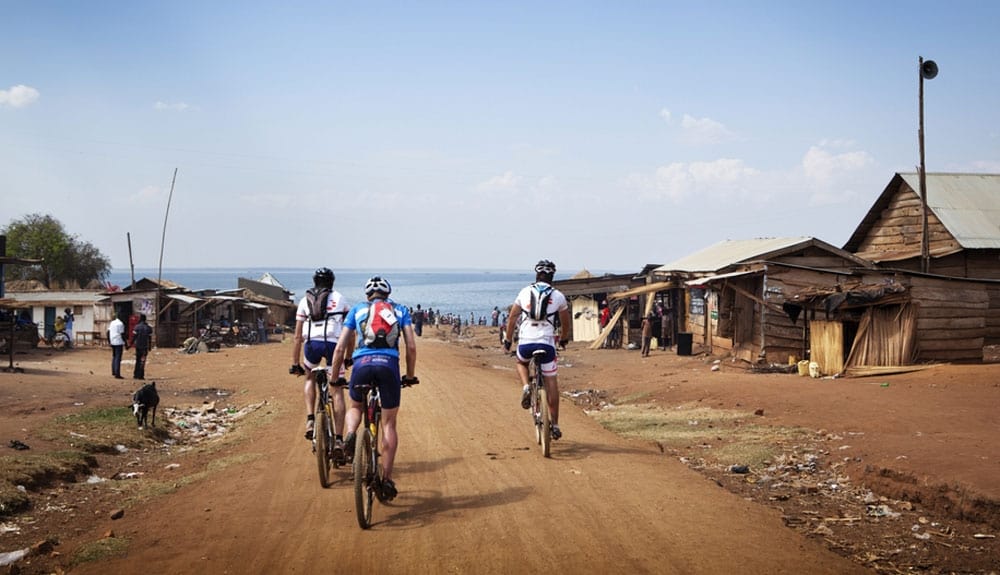 Why Should I Participate?

While the bike ride offers a rare opportunity to cycle for six days through breathtaking terrain alongside top corporate executives, participants will have a chance to interact and listen to inspirational stories from both Georgie Badiel of the Georgie Badiel Foundation and Noella Coursaris of Malaika.

Badiel and Noella have unique stories of determination and perseverance that start from their childhoods in Africa to their international fashion modeling careers, hitting the catwalks of Paris, London, and New York.

For those looking for a chance to network, have fun, and stay fit, the North American edition of Bike for Africa offers a perfect opportunity. There will also be a welcome reception at the start of the journey and celebrations on the last day of the tour in New York City.

The B. Foundation has also organized a special session for participants to speak with Badiel and Coursaris on June 15, 2017, at Belcham.

Participants will be inspired by their personal stories and those of their foundations and learn more on how they can directly contribute to the impact of the North American edition of the charity road bike.

Donate To Make a Difference

Participation in the bike ride starts at $2,500, which includes the cost of participating as well as the minimum donation to the Georgie Badiel Foundation and Malaika, which will be split evenly. There are also sponsorship opportunities for corporations and executives.

Though not limiting itself to a specific fund-raising target, Brussels Airlines has set the number of participants at 50 to ensure the bike ride remains intimate and offers a unique opportunity for partakers to bond with an eclectic group of individuals from around the world and different sectors.

“We hope to get as many people excited about supporting these fantastic causes as possible. And because we realize that six days of biking will not be appealing to all, there are lots of other ways to get involved! The easiest is to donate directly through our fundraising platform,” says Bonaiuto.

Donate to this cause here, and for further inquiries kindly send an e-mail to BikeForAfrica.NA@BrusselsAirlines.com.