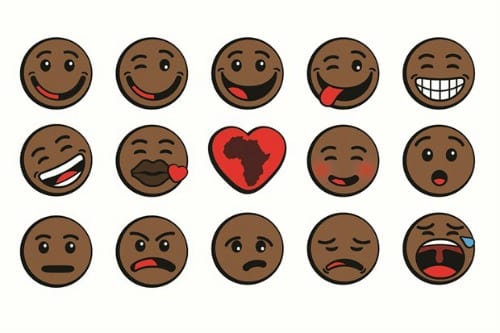 Emojis, the cute characters Apple and Android smartphone users have been using in droves, lacked a bit of variety in the racial diversity category. Now, Oju Africa, an African company has developed its own version of the images that feature the first Black images in the vastly popular world of emojis.

Oju Africa, which is part of the African mobile firm Mi-Phone, got the jump on the Black emojis in a response to complaints that the images didn’t feature Black images.

Apple has reportedly heard the complaints and said it is working with developers to bring forth a wider array of emojis, but Oju Africa certainly beat them to the punch.

“We follow global trends but we are differentiated by our authentic African voice. So as a brand we wanted to do something that only Africa could pull off, something that could become so iconic that it would have the world talking. I believe what we have created will ensure that every African on the planet won’t be able to help but love it!”

Emojis reportedly originated in Japan, and the images are used to convey certain emotions or thoughts. Emojis were only available in Japan but by way of a Unicode system, the images are used on an array of smartphone devices and social media forums.

For Android users who want to try out Oju Africa’s emojis, head over to the Google Play Store and download them for free!

SEE ALSO: My Personal Experience with Colorism in My Country Ghana