Known for her novel, Joys of Motherhood, Buchi Emecheta was a victim of stereotypes that saw women as inferior to men. But she did not let that dim her lights.

Born on July 21, 1944, in Lagos, Emecheta grew up in poverty and deprivation both physically and emotionally.  She did not go to school because her parents thought it useless to send a girl to school. She managed to convince her parents of the benefits of education and was able to attend an all-girls missionary school.

The death of her father due to injuries sustained in Burma while fighting for the British Empire affected Emecheta in different ways.  She and her brother were left at the mercy of her uneducated mother who could not appreciate her talent.

It was because of a government official, Mr Halim, that she was able to continue with her education. Halim was able to see her potential and intelligence and encouraged her to study instead of selling oranges as her mother had wanted.  She won a scholarship to Lagos where she encountered other prestigious girls.

Years later, she would get married to Sylvester Onwordi with whom she had five children. Their marriage was tumultuous and even violent. Her husband was highly suspicious of her writing that he burnt down one of her manuscripts, which she rewrote and published in 1976 under the title Bride Price. 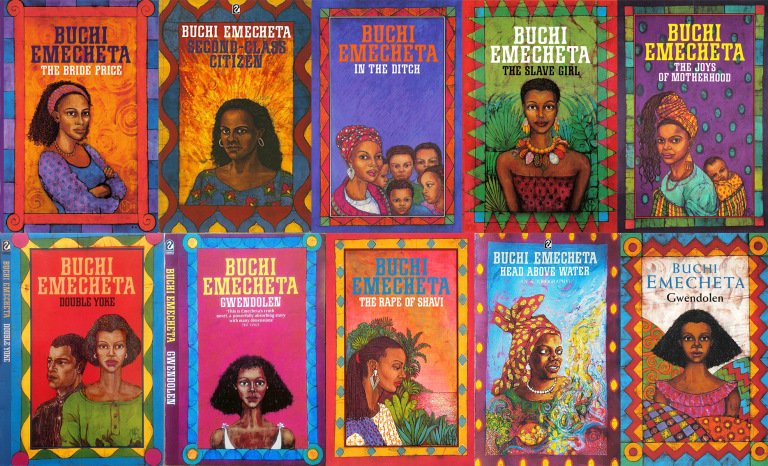 She left her husband when she was 22 and pregnant with her fifth child.  She not only took care of her children on her own but also earned her  B.Sc (Hons) degree in Sociology in 1972 from the University of London.  She went ahead to earn her PhD in 1991.

Emecheta’s writing has been lauded for highlighting the realities of black women experiences, highlighting race, gender constructs and poverty.

According to her son Sylvester Onwordi, Emecheta was a compulsive writer who was inspired by Africa.

The main source of inspiration for her writing, however, was Africa, and in particular the villages of Ibusa in eastern Nigeria where her family came from. Even though she had spent a relatively brief period of her childhood there, the villages and the stories she heard on her visits with her mother left an indelible mark on the impressionable young girl and became the lodestone for all she wrote. In The Slave Girl, The Bride Price and the ironically titled Joys of Motherhood, she poignantly captured, in a manner reminiscent of her male contemporary Chinua Achebe, a vanishing Igbo culture in the process of transition to modernity.

She also identified herself as a feminist in all she did and said.

Her death on this day in 2017 robbed Africa and the world of a revolutionary woman who left a mark with words.