China is deepening its stronghold of Africa with the visit of President Xi Jinping who is in Rwanda for a two-day visit to cement the “lasting friendship” which has made China the East African country’s largest trading partner.

The United States will be peeved by the level of depth of the China-Africa partnership as Donald Trump has proven to be self-centered while hungry to maintain its waning African partnership. The most striking being the threat of sanctions against Rwanda for banning the importation of used clothes which will affect the U.S.

Jinping has played his cards right with the visit to Rwanda and he told it best in a letter which was published by local media. He set the tone with praises for Africa’s fastest developing country and then hit the soft spot with a poem.

“As a Chinese poem reads, ‘Good friends feel close to each other even when they are thousands of miles away.’ Despite the vast geographic distance and differences in size, system and culture between China and Rwanda, our peoples enjoy a deep traditional friendship.”

He then listed dozens of Chinese projects completed and ongoing in Rwanda while hitting the note of friendship, cooperation, international collaboration, mutual understanding, cementing political foundation and all the cliches that basically mean “be on our side and do what we want you to do”.

The Chinese projects in Rwanda he mentioned included the Amahoro National Stadium; Musanze Integrated Polytechnic Regional College; the soon to be completed project of drilling 200 wells in rural Rwanda, a garment factory set up by a Chinese entrepreneur and a Chinese company undertaking 70 percent of Rwanda’s national highway construction.

He mentioned more: Masaka Hospital and the Kibungo Hospital built by China and having Chinese medical teams serving the people, digital TV services to be brought to 300 villages under an ongoing project of providing access to satellite TV to a total of 10,000 Rwandan villages.

There was no mention of Rwandan projects in China but the several hundred talented young Rwandan students studying in China on Chinese government scholarships as well as the “Rwanda Kung Fu/Wushu Federation has over 2,000 participants.”

This doesn’t look like a cooperative partnership but a domineering one when one party is playing King and calling the shots for obvious reasons. Meanwhile, there is trust in Rwanda’s Paul Kagame who looks like he knows what he is doing as he had said in the past that opening the doors of international support is only for the benefit of the people and anything that doesn’t benefit the masses, should be shut out.

This is the first-ever visit of a Chinese president to Rwanda. 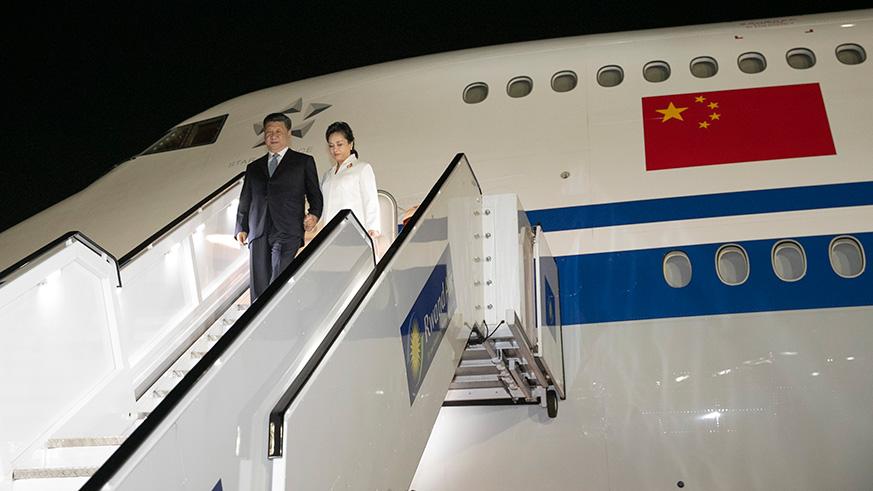 Read the full letter below:

China and Rwanda: A friendship higher than mountains

Known as the “land of a thousand hills”, Rwanda is blessed with picturesque sceneries, a spring-like weather all year round, and rich endowment of natural resources. Thanks to the unremitting efforts of the brave and hard-working Rwandan people, this country has remained a vibrant land on the African continent.

In recent years, under the leadership of President Kagame, the government and people of Rwanda have made pioneering efforts to blaze a development path that suits its national conditions. Enjoying good governance and social harmony, Rwanda is making progress on every front of development. With sustained stability and robust economic growth, Rwanda has seen a continued rise in its regional and global influence, and has set an example for countries who face the similar tasks of national development and rejuvenation in Africa and beyond. I am heartened to see these accomplishments and sincerely wish Rwanda still greater success on its way forward.

As a Chinese poem reads, “Good friends feel close to each other even when they are thousands of miles away.” Despite the vast geographic distance and differences in size, system and culture between China and Rwanda, our peoples enjoy a deep traditional friendship. Both our two countries endured great sufferings in history. That is why we cherish the national stability, ethnic unity and economic development we now enjoy, and take pride in what we have accomplished along the way.

China and Rwanda established diplomatic relations in 1971. Over the past 47 years, our two countries have treated each other as equals with sincerity and friendship.

Based on mutual trust and assistance, our friendship has stood the test of the changing international landscape and taken root in our people’s hearts. In recent years, thanks to the concerted efforts of both sides, our bilateral ties have achieved fast expansion and demonstrated fresh vitality with fruitful cooperation in all areas. China has become Rwanda’s biggest trading partner and project contractor. We are glad to see that the Amahoro National Stadium built by China has hosted many spectacular sports games and become a popular recreation and entertainment venue for the Rwandan people.

The Musanze Integrated Polytechnic Regional College has grown into the biggest professional training centre in Northern Province. The project of drilling 200 wells, soon to be delivered, will help ease water shortages for over 110,000 people. The garment factory that a Chinese entrepreneur has set up in response to President Kagame’s “Made in Rwanda” development initiative is playing a positive role in growing Rwanda’s manufacturing sector. Another Chinese company has made itself a household name in Rwanda as it undertakes 70 per cent of Rwanda’s national highway construction.

People-to-people friendship holds the key to good state-to-state relations. The rich and diverse people-to-people exchanges between our two sides have led to a growing interest in China and Chinese culture among the Rwandan people. Each year, several hundred talented young Rwandan students go to study in China on Chinese government scholarships. The number of registered students in the Confucius Institute at the University of Rwanda is approaching 5,000. The Rwanda Kung Fu/Wushu Federation has over 2,000 participants.

At the Masaka Hospital and the Kibungo Hospital – two hospitals built by China – caring and highly-skilled members of the Chinese medical teams are providing much needed services to more than 600,000 local people. Digital TV services will soon be brought to 300 villages in Rwanda under an ongoing project of providing access to satellite TV to a total of 10,000 Rwandan villages, enriching the cultural life of over 150,000 rural residents.With Rwanda actively implementing its Vision 2020 Umurenge Program and China working toward its centenary goals, historic opportunities beckon for our cooperation. During his visit to China in March 2017, President Kagame and I reached important consensus on deepening cooperation in various fields under the new circumstances and made overall plans for the future growth of relations between our two countries. I hope my upcoming visit will inject new impetus to our traditional friendship and all-round cooperation, take bilateral relations to a new level, and produce fruitful results to the benefit of our peoples.

• We need to uphold mutual respect and deepen political mutual trust. We should view and grow our relations with a strategic and long-term perspective. By way of enhancing exchanges and cooperation at all levels and sharing development experience, we will be able to cement the political foundation for the sound, steady and sustained growth of our relations. China firmly supports Rwanda in following the development path it has independently chosen.

• We need to connect our development strategies and expand cooperation in all areas. By leveraging our complementarities and broadening the scope and channels of cooperation, we will be able to advance practical cooperation in infrastructure, mining, trade and investment, translating our friendship into concrete outcomes and delivering more benefits to our peoples.

• We need to strengthen collaboration in international affairs through closer communication and coordination. China commends and supports the efforts of Rwanda, the current chair of the African Union (AU), to play a bigger role in preserving Africa’s unity and promoting its development. Our two countries will continue to firmly uphold the common interests of developing countries through close communication and coordination in regional and international affairs.

The friendship between our two countries is an epitome of the friendship between China and Africa. For decades, China and Africa have treated each other with sincerity and friendship. We are a community with a shared future and common interests, featuring solidarity and win-win cooperation. Going forward, China will continue to deepen communication, mutual trust and cooperation with Rwanda and with other friendly African countries, based on the principles of sincerity, real results, affinity and good faith and the approach of upholding justice and pursuing shared interests. In just over a month’s time, China will host a summit of the Forum on China-Africa Cooperation (FOCAC) in Beijing. I will welcome President Kagame to the summit in his capacity as President of Rwanda and as the current AU chair. I look forward to meeting with him and other leaders of FOCAC members to draw up a blueprint for furthering China-Africa friendship and cooperation and promoting our future development.

The decades-old Umuganda culture in Rwanda encourages joint efforts and mutual help for common goals. A Chinese saying contains a similar message, “People with one mind and heart have the power to move a mountain.” In a world of increasing inter-connection and inter-dependence, countries are faced with many common challenges. It is important for China and Rwanda to join hands for mutual benefit and common development and for a community with a shared future between our two countries and between China and Africa as a whole. I am convinced that with the joint efforts of our two governments and peoples, China-Rwanda relations will embrace an even brighter future.