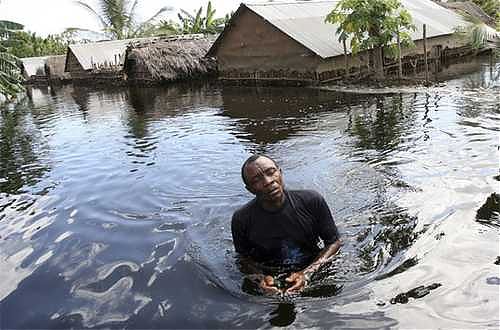 Dougui, Far North Region – Cameroon (Face2Face Africa) More than 200 people  have been rendered homeless in the town of Dougui, Kai Kai District in the Far North Region of the West and Central Africa State of the Republic of Cameroon.

The incident happened when a portion of the dyke along River Logone collapsed as a result of very heavy rains, causing floods that have left hundreds of families without shelter.

To avoid the situation from escalating further, some 3,000 bags of sand and mud have been used to block the dyke from overflowing banks to other neighboring villages.

According to the Sub Divisional Officer of the locality, Mr. Nkwenti Simon Doh, some of the bags of sand and mud will be used to construct makeshift protection dams, while two motorize canoes have been set aside to transport victims to secured areas where they are being taken care of by the Red Cross.

This incident is happening exactly one year after a similar situation that occurred last year, when many lives were lost, farms ravaged, and animals carried away by the waters.