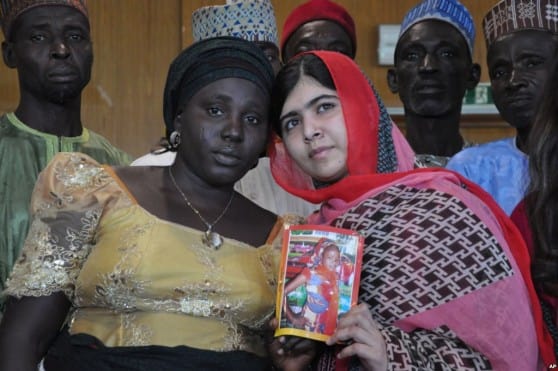 With much of the world focused on the gains of President-Elect Muhammadu Buhari’s party , All Progressive’s Congress, in Saturday’s elections, the one-year anniversary of the nearly 300 girls abducted by Boko Haram appears to be flying under the radar. Therefore, girl education advocate and Pakistani blogger Malala Yousafzai (pictured right) made sure to write an open letter to the missing girls on Monday to continue bringing awareness to the incident and rejuvenate the #BringBackOurGirls movement.

With President Jonathan winning just a fraction of states compared to his successor in March’s elections, many believed voters opted for the former military general because Jonathan appeared almost indifferent toward Islamic terrorist group Boko Haram.

The violence of the militants was thrust in to international consciousness last April, once hundreds of girls were kidnapped from Government Secondary School by the group as they took exams in Chibok.

At the time, the abduction of the girls appeared to be a non-priority for President Jonathan as nearly three months would go by before he would meet with grieving parents.

Watch Mothers protest the kidnapping of their daughters here:

The long-awaited meeting, though, wouldn’t be of his design; instead, 17-year-old Yousafzai would initiate the much-needed meeting on her birthday visit to the country.

Now a year later in a heartfelt letter, Yousafzai, 2014’s Nobel Peace Prize winner, is once again using her platform to make sure that the girls of Chibok aren’t forgotten.

To my brave sisters, the kidnapped schoolgirls of Chibok,

On this first anniversary of your captivity, I write to you with a message of solidarity, love and hope. My name is Malala. I am a Pakistani girl your age. I am one of the millions of people around the world who keep you and your families foremost in our thoughts and prayers.

We cannot imagine the full extent of the horrors you have endured. But please know this: we will never forget you. We will always stand with you. Today and every day, we call on the Nigerian au-thorities and the international community to do more to bring you home. We will not rest un-til you have been reunited with your families. Like you, I was a target of militants who did not want girls to go to school.

Gunmen shot me and two of my friends on a school bus. All three of us survived and are back in school. Now we speak out on behalf of all girls about the right to get a proper education. Our campaign will continue until you and all girls and boys around the world are able to access a free, safe and quality secondary education.

Last July, I spent my 17th birthday in Nigeria with some of your parents and five of your classmates who escaped the kidnapping. Your parents are grief-stricken. They love you, and they miss you. My father and I wept and prayed with your parents – and they touched our hearts.

The escapee schoolgirls my father and I met impressed us with their resolve to over-come their challenges and to complete their high school education. My father and I promised your parents and the girls who had escaped that we would do all we could to help them. I met Nigerian President Goodluck Jonathan and urged him to work harder for your freedom. I also asked President Jonathan to meet your parents and the girls who escaped the kidnapping, which he did a few days later.

Still, in my opinion, Nigerian leaders and the international community have not done enough to help you. They must do much more to help secure your release. I am among many people pressuring them to make sure you are freed. There are reasons for hope and optimism.

Nigerian forces are re-gaining territory and protect-ing more schools. Nigeria’s newly-elected president, Muhammadu Buhari, has vowed to make securing your freedom a top priority and promised his government will not tolerate violence against women and girls. You will have the opportunity to receive the education you want and deserve.

The Malala Fund and other organizations offered all your classmates who escaped the kidnapping full scholarships to complete their secondary education. Most of the escapee girls accepted this scholarship and are now continuing their studies at a safe boarding school and with the sup-port they need. We hope to someday extend that same scholarship to all 219 of you, when you return home.

Remember that one day your tragic ordeal will end, you will be reunited with your families and friends, and you will have the chance to finish the education you courageously sought. I look forward to the day I can hug each one of you, pray with you, and celebrate your freedom with your families. Until then, stay strong, and never lose hope. You are my heroes.