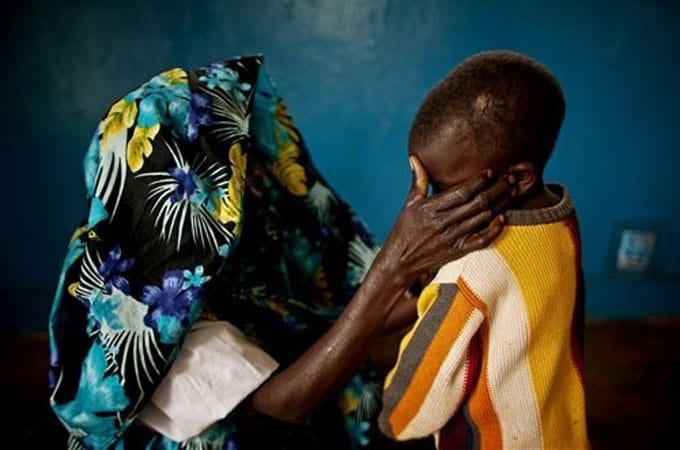 I become emotional when my patient is in too much pain and I cannot help.

When I lose a patient, I cry.

And when a man fights back his tears after losing his wife while bringing a life to this earth and he holds the baby and cries instead of smiling, I cry too.

But I have cried more after looking at a 2 year old with a broken hymen that was torn by a penis as long as a cooking stick and fat as a donkeys.

RELATED: MOTHERS, LISTEN TO YOUR DAUGHTERS

It is difficult, I must confess, imagining a grown man on top of a tiny girl, moving his pelvis back and forth, writhing in pleasure, pinning down tiny hands, and pretending that it is normal.

My heart aches when I see these  little girls walk — legs wide apart — face cast down, guilt on their faces, and scared about the people around them, scared that they might be killed by those who stripped them, those who lied with them against their wish.

Parents, teach the young ones, tell them there are parts of their bodies that no one should ever,  ever touch. Be close to them so that they may let you know as soon as this happens. Take charge of educating your child.

Sex cannot continue being a taboo word in this era when humans are rising against small girls and boys — you cannot avoid mentioning a “vagina” and “breasts” and “anus.”

Let your little boy know that no one should put their “thing” in his anus, that nobody should touch his thing. If we are shy, then we let our children be victims to the wolves, and they get eaten each day.

When it happens, remember to act fast, rape is a race against time: every victim of sexual assault needs post-exposure prophylaxis to prevent against acquiring HIV; teenage girls, adolescents, and women in the reproductive age group need contraceptives to prevent pregnancy.

Let us all work together: a rapist is a rapist whether he is a pastor, an Aunt, a nanny, a Father, or a teacher. By keeping quiet about rape that occurs at the level of the family, we ruin little lives, we distort their perception of love, marriage, and sex. Worse still is we contribute to ruining their health.

Empower a young life today, talk with them, and the world will become a better place for you and for me.

That we no longer talk a lot about rape doesn’t mean it doesn’t happen. No, rape will not defeat us. We have fought and we will fight by telling the children what they must know to keep safe, and to let the rapists in to the hands of the law.