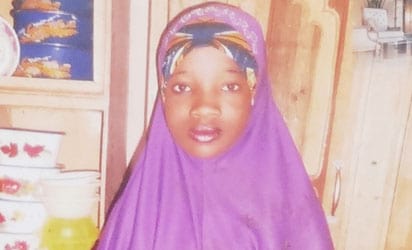 This week, Hussaina Aliyu Ibrahim, the defense counsel for 14-year-old Nigerian Wasila Tasi’u (pictured), asked that all charges against his defendant be dropped in the murder case that has thrust the issue of child marriage in Islam societies back in to the spotlight, according to the Vanguard.

Last April, Face2Face Africa reported on Tasi’u’s (then named as Wasilu Umar) murder of her 35-year-old husband Umar Sani and three of his friends during their wedding celebration:

Assistant Superintendent Musa Magaji Majia says that Umar confessed to poisoning her groom, saying, ‘The suspect confessed to committing the crime and said she did it because she was forced to marry a man she did not love.’”

But Tasi’u’s crime has reportedly polarized the nation, with those in the South saying that Tasi’u should be released of the crime due to her age: in Nigeria, marriage is legal at age 18.

However, in the Muslim-dominated North, where Tasi’u is from and where the incident happened, most observe Shariah law, which permits the marriage of girls as young as 9 years old.

Tasi’u’s defense attorney Ibrahim appears to be using the legal age of marriage to receive a “no case submission” from presiding Judge Justice Muhammmad Yahaya.

A no case submission declares that the claim against a defendant is not sufficient for conviction because it is based on insufficient legal grounds or factual evidence.

At the defendant’s request, however, prosecution lawyer Dinki argued against the possible ruling, countering that based on a Supreme Court judgment in 2013 involving Agbo v. State, “a no case submission should be determined within the narrow compass of the legally admissible evidence produced by the Prosecution and as such should be based on a case value.”

[Dinki] submitted that the no case submission can’t stand on the case under review, adding that such step would pave way for the accused persons to escape justice through back door.

On March 31st, Judge Yahaya will determine whether they will indeed drop the charges against the child.