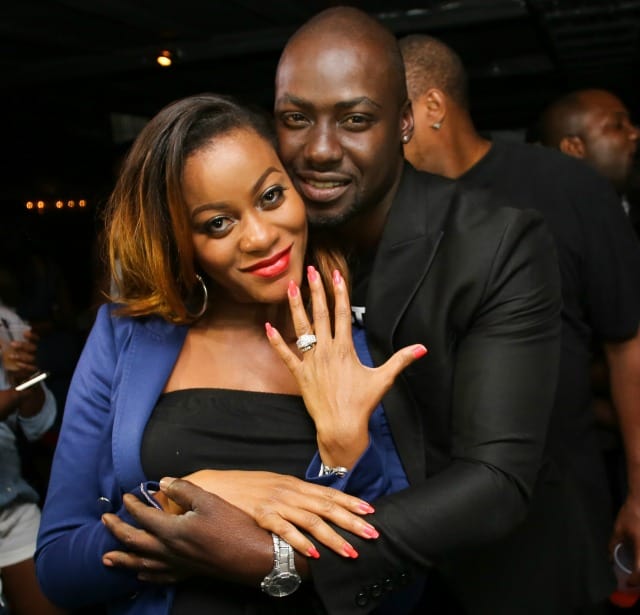 On Sunday, former “Big Brother Africa” host and celebrated Nollywood and Ghollywood actor Chris Attoh (pictured right) proposed to well-known beau and “Tinsel,” “Flower Girl,” and “6 Hours to Christmas” actress Damilola Adegbite (pictured) aboard a cruise ship while on summer holiday in New York City. In the midst of all the excitement, 35-year-old Attoh of “Shuga,” “Tinsel,” “Flower Girl,” and “Love and War” took time out to speak with Face2Face Africa about his upcoming nuptials to Adegbite and explain how he knew she was “the one.”

Face2Face Africa: How long have you been dating your bride-to-be?

Chris Attoh: We dated briefly almost eight years ago when we first met. It was magic at first sight. This is while I was doing some work in Nigeria, but once I was done and had to leave, we drifted apart and called it quits rather abruptly. Little did I know that our destinies were tied together.

Next time I saw her was almost a year later; she was dating someone else and so was I back home in Ghana. There was still a lot of chemistry and magic between us, but we decided friendship was a better option at the time. We stayed working colleagues for almost seven years working on shows like “Tinsel” and co-starring in two feature films together.

Some time early last year, we both found ourselves single and decided to give the magic we had first felt another try. Now, here we are today with years of friendship behind us and still much passion between us. I couldn’t be happier.

F2FA: What made you decide this was the right time to propose?

CA: This is something I prayed about for months. Once I made the decision, I asked for signs and watched many of them come to slap me in the face. They say that everything is in its time, and right now feels like a bloody good time. Lol!

Back home there has been a lot of media attention surrounding our relationship, and the press ha been very eager for updates on our story. Even though we welcome that and would love to always share updates  with our fans and the world, I felt we owed each other some much-needed privacy.

With the help of some friends and Angels, I took her on a cruise across the shores of Manhattan and it went well.

F2FA: How did you know that she is the one?

CA: I believe friendship and passion are important keys to a long- lasting successful relationship. In our case, we have that and more. The fact that we work in the same industry also helps, as she understands my crazy hectic work schedules, and I, hers. We get to talk about work on- and- off-set, we share similar goals, her birthday is a day after mine, and we simply get each other. All I can say is when you find a good thing you know it, you feel it in your gut. I felt it in mine, and it’s a great time to take this to the next level.

F2FA: When do you think the actual traditional wedding and white wedding will be?

CA: Well, as you may have heard, God has been good and we are expecting an additional member in the family, so once baby is here and mama is ready to handle the celebrations for the traditional and the white, we will let you know. So for the exclusive on that, check back right here on Face2Face Africa. We will keep you posted!