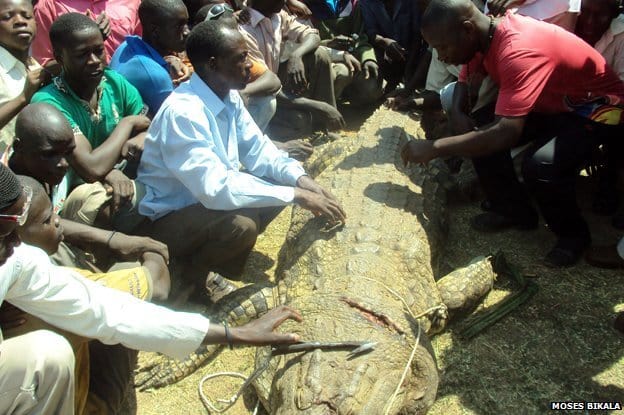 After losing his pregnant wife, Demeteriya Nabire, to a crocodile four months ago, husband Mubarak Batambuze was able to get revenge, when he and his community took down the crocodile in Uganda’s Lake Kyoga, according to the BBC.

When wife Nabire was fetching water from the lake with a number of other women, a crocodile — reportedly weighing 600 kg and longer than four meters — snatched her, with no one ever seeing any trace of her again.

Batumbuze, a fisherman, explains, “The crocodile ate my wife entirely. Nothing was ever seen of her again – no clothes, no part of her body that I could identify. I just didn’t know what to do – a mother and her unborn child. It was the end of my world. I was completely lost.”

A month later, friends alerted him when the deadly crocodile returned, “Somebody called me and said, ‘Mubarak, I have news for you — the crocodile that took your wife is here — we are looking at it now.'”

And even though the 50-year-old Batumbuze and his friends attempted to assault the crocodile, their efforts were in vain.

“He was a very big monster, and we tried fighting him with stones and sticks. But there was nothing we could do,” says Batumbuze.

After taking some time to consider what he was up against, Batumbuze decided to pay a visit to his local blacksmith. 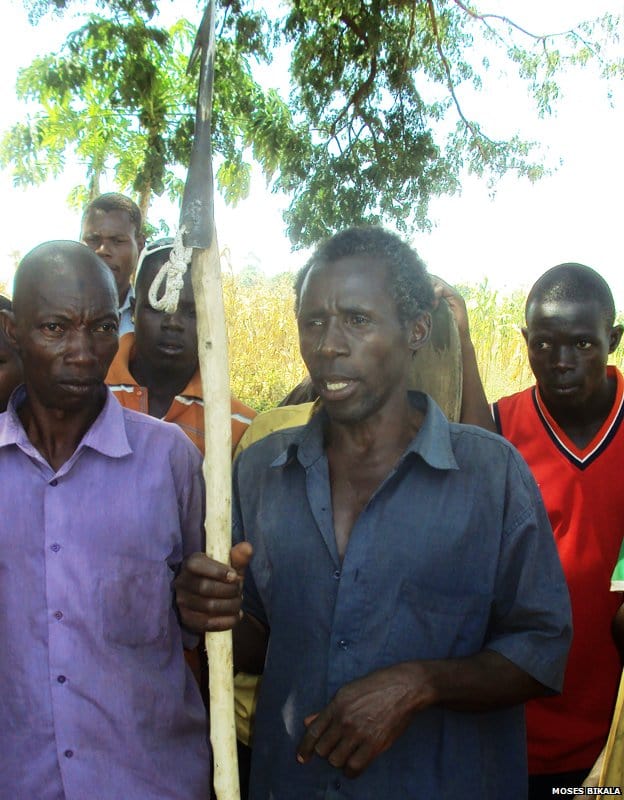 “I explained to him that I was fighting a beast that had snatched and killed my wife and unborn baby. I really wanted my revenge, and asked the blacksmith to make me a spear (pictured) that could kill the crocodile dead.”

When Batambuze returned to the lake, the crocodile was waiting.

Batambuze says that at the sight of him, his friends begged him to change his mind about attacking the beast because they feared he would lose his life just as his wife did.

“‘Please don’t attack this beast,’ they pleaded, ‘it’s so huge it may eat you. The spear is not enough – it won’t finish the job.'”

At the time, Batambuze replied, “I failed killing it the first time around. I’m not bothered if I die killing this beast. I’m going to take it on with this spear, and I will make sure that it dies.”

Undeterred, Batambuze began attacking the crocodile, with his dependable friends joining in with the difficult task.

“I had so much fear in me but what helped me to succeed was the spear,” says Batambuze.

He tied a rope to the end of the weapon so that once the tip was embedded in the crocodile, he could pull it out at an angle and the barb would cut into more of the animal’s flesh.

“I put the spear into the crocodile’s side, and while my friends were helping to throw stones at the beast’s back, it tried getting its mouth up to attack me again.

“It turned violent, and then there was so much fear in the place. But I was so determined, and I wasn’t afraid of dying. I just wanted it dead, so I put the spear in its side and I pulled the rope. That got the crocodile into trouble.”

An hour and a half later, the crocodile was dead.

And the feat has pegged Batambuze a hero in his community.

“Within myself I’m a very depressed man because I lost a wife and an unborn child,” he explains.

“But the locals keep on saying, ‘Thank you for killing the beast, that’s where we fetch water and we’re sure it would have taken somebody else. Thank you so much, you did a great job.'”

“So I’m a local hero – people keep on thanking me.”