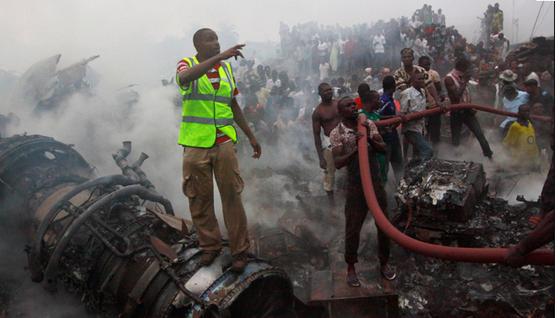 As details continue to emerge on Nigeria’s deadliest aviation accident in 20 years, the nation continues to mourn. It has been just over ten days since a Dana Airlines jetliner plunged to the ground and burst into flames a mere five miles outside of Murtala Muhammed International Airport, killing all 153 passengers and ten pedestrians. While U.S. officials have arrived in Lagos to begin their formal investigation on the ill-fated Boeing MD-83, grieve stricken loved ones and the international community at-large demand answers.

In a country marred by corrupt practices and corrupt governmental regimes, one cannot help but wonder whether the tragic event on June 3rd is a manifestation of lack of oversight too often seen in the sub-Saharan African nation.  While it could take months for a formal investigation to be completed and information from the flight data recorder (black box) to be collected and analyzed, a resounding message from the Nigerian community in the states and diaspora rings clear—they want answers and they want answers now! Delayed rescue efforts, coupled with initial reports pointing to the jetliner operating while in deplorable conditions bolsters the cry for answers.

While my professional background and expertise is not rooted in aviation nor aviation procedures, the undeniable truth is that airplanes do not fall from the sky unless something goes terribly wrong. Moreover, the sheer nature of airplanes makes it such that when problems arise, they are detected through routine maintenance checks. This begs the question of whether the issues that caused the death of 163 innocent lives could have been prevented if appropriate measures were taken. Again, there is an on-going investigation and the cause of the accident has not been identified, but one cannot help but think “what if” and “why”.

Too often when tragedy strikes, our first inclination is to point fingers. As the status updates are posted, opinion articles are written and emails flood our inbox, I ask that we all take a second to think beyond the surface level of this incident. Instead of engaging in “the blame game” I implore the Nigerian government and its citizens to use this incident as the impetus to better the nation’s aviation sector and safety protocol. The deadly crash cannot be used as an exploitation tool or platform to fuel political propaganda and rhetoric. This is a travesty that must not be repeated nor ignored.  If the Nigerian government fails to take action and procedural laxity in the aviation sector continues, the family of six from Connecticut, the two sisters from Texas and the sea of others who are merely innocent victims would have died in vain. If the Nigerian government fails to restructure the nations aviation safety protocol it would be an even greater tragedy than what we experienced on the tragic first Sunday in June. Nigeria, the world awaits your response.