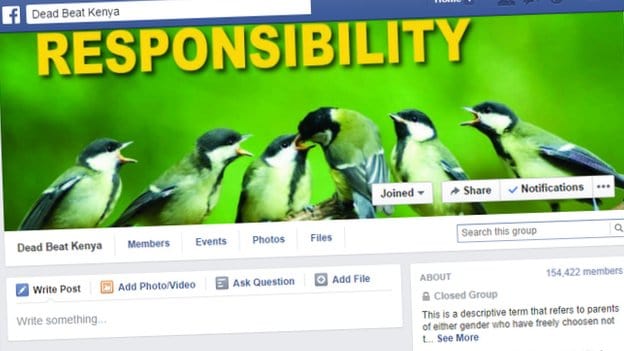 Claiming that he is filling a void in the Kenyan justice system, Jackson Njeru recently set up the Facebook page “Deadbeat Kenya”  in order to provide a platform for the public to publicly shame deadbeat parents.

Any parent who feels that their child’s mother or father isn’t taking care of their responsibilities can post their name, photograph, phone number, and dispute on Deadbeat Kenya for others to see.

And contrary to what some may think, Njeru says that he doesn’t  post every complaint that comes his way. Instead, there is a process.

“We first call the person who is accusing, then we call the accused. From there if the person is not willing to take care of his or her own responsibility, that’s when we approve the post,” he told the BBC.

Still, an alleged deadbeat Dad whose information was posted on the site by a disgruntled woman complained, “What she is saying is not true, and she is damaging my reputation.”

In fact, the man contends that he is not even the Father of the child and believes the site is destructive, “It is just a forum that is made to destroy relationships and put people on the line,” he says.

But Njeru has a different perspective. According to him, many parents want to take deadbeat parents to court but can’t afford it in Kenya; therefore, Deadbeat Kenya provides an alternate solution.

“Whatever we’re doing, it’s all because of the justice system,” he says. “People are complaining the system is corrupt. They’ve tried taking their deadbeats there, but they are told to get a lawyer they can’t afford.”

So far the page, which is a closed group, has garnered more than 150,000 members and more than 61,000 likes in just over a week. In addition, a handful of lawyers have supposedly offered their services pro bono.

And what of the contentious couples?

Njeru claims that six couples have been able to reconcile.