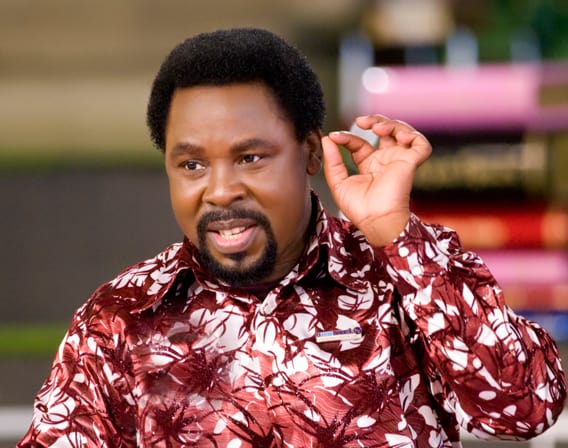 Ever since one of Prophet T.B. Joshua‘s (pictured) buildings collapsed, many on the Internet are discussing his wealth, which has made him one of the wealthiest pastors in the world.

Last Friday, at least five church groups from South Africa were attending a conference on Joshua’s  Synagogue Church of all Nations (SCOAN) campus, when the hostel they were staying in collapsed, killing 80 people. Sixty-seven of those victims were South African. Another 130 people reportedly survived.

In response, South Africa sent a team to Nigeria to help locate other victims, and as recently as Monday, a woman was pulled out alive from the rubble.

And while both Joshua and his congregation see the collapse as an attack on the church, responders say that the collapse likely occurred because floors were added to the building without reinforcing the structure.

Either way, the collapse has put Joshua in the limelight, with many resurfacing articles on Joshua’s position as Nigeria’s third wealthiest pastor.

With SCOAN estimated to be worth between $10 to $15 million (USD), Nigerian blogger and Forbes writer Mfonobong Nsehe told the BBC back in 2011, “Preaching is big business. It’s almost as profitable as the oil business.”

Through Nsehe’s research, he found that the joint wealth of Nigeria’s top five pastors is in excess of $200 million (USD).

Topping the Forbes list is Bishop David Oyedepo with an estimated net worth of $150 million. He founded the Living Faith World Outreach Ministry in Nigeria, which is Africa’s largest worship centre, with a seating capacity of 50,000. Oyedepo is reported to own four private jets, a publishing company, a university, an elite private school, and property in London and the United States.

In comparison, Joshua’s church accommodates 15,000 worshipers on Sundays, and according to MonteOz, Joshua is the 10th richest pastor in the world.

Joshua also owns a TV network, Emmanuel TV, where his Sunday sermons are broadcast live to millions of viewers around the world. SCOAN also has branches in South Africa, Greece, Ghana, and the United Kingdom.

About the message these pastors’ wealth imparts, Nsehe said, “These pastors are flamboyant. You see them with private jets and expensive cars. This extravagance sends out the wrong message to their followers.

“We have Nigerians who are desperate, looking for solutions to their problems. They go to church for salvation, redemption, and healing, and pastors sometimes take advantage of them.”

Still, tens of thousands of people from around the world have flocked to the Lagos church to receive blessings and seek healing from the popular pastor who famously claims to have the ability to heal the terminally ill and perform miracles.

Joshua shot to fame following a TIME Magazine feature that hailed him as one of the greatest faith healers of his era.

Joshua says he was born special after his mother allegedly carried him for 15 months before he was born.

He also claims to be a prophet because he predicted a number of global events, including the cyclone in Myanmar, Michael Jackson’s death, the Boston marathon bombing attacks, and the disappearance of Malaysian Airline’s flight MH370.

Responding to Nshe’s analysis, Joshua vehemently denies being a multimillionaire, saying money collected from congregation members was used to aid the poor and needy.

“We cannot be categorised among the wealthiest in Nigeria because what money we receive is not accumulated but rather given out to those who need it most.

“There is not enough to keep for tomorrow. As it comes, we give it for the needy,” he was quoted as saying.