A recent study done by the United Nations Children’s’ Fund (UNICEF) ranks Malawi eleventh in the list of countries with the highest rate of child marriage in the world. The Fund further reports that almost 1 in 2 girls in Malawi gets married before her 18th birthday.

Sadly, most of these child brides are abandoned by their husbands soon after they give birth. With current mass exodus of young Malawian men to neighboring countries in search of greener pastures, most child marriages end abruptly, leaving the young brides stranded and desperate.

Lacking in money to feed their young families and a place to live, the teenage mothers turn to prostitution as a way of earning a living.

“I’ve talked to some young women who were left by their husbands who went to South Africa, but they don’t receive any financial support from their men. They said they ended up prostituting in order to survive and support their children,” Forbes Msiska, an executive director of a local charity, Badilika, told Reuters.

Many of these girls, some of whom are as young as nine years, work in brothels and drinking joints where they are often abused. Joyce Masamba, who got married at the age of 15, told Reuters that she was forced into prostitution after her husband left her for another woman.

The 27-year-old mother of three revealed that she only earns about 1,000 Malawian Kwacha, an equivalent of $1.40, per client, which can’t fully feed and clothe her and the children.

“Goodness knows how I’ll support them when they reach secondary and need things like school fees,” said Masamba.

Like many other African countries, Malawi is still struggling with archaic traditions decades after its independence. Many communities, especially in the rural areas, still practice early marriages, with young girls, some as young as ten years, being sold off as brides by their own families. 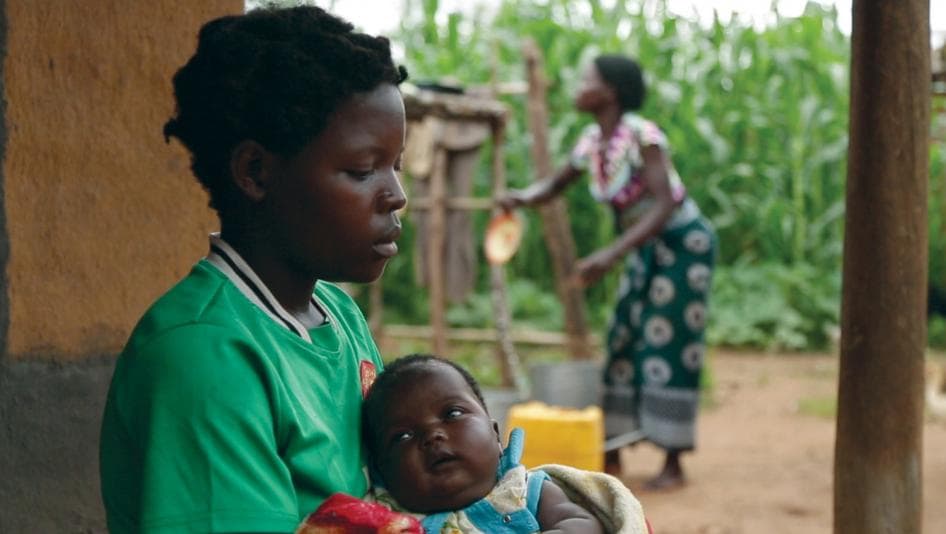 A young Malawian bride with her child. Photo credit: HWR

These harmful traditions continue to thrive in the South African country despite the government’s efforts to outlaw them. In 2015, the government of Malawi amended the constitution to criminalize marriage of persons under the age of 18.

Earlier this year, the Malawian Minister of Gender, Jean Kalilani, spoke passionately against child marriage, saying it posed a serious threat to the country’s economic and social development.

But local non-governmental organizations and civil rights groups blame the government for the rising cases of child marriages and the ensuing divorces that force the young brides into prostitution.

While acknowledging that the revised law and media campaigns have had an impact, these organizations are convinced that it will take more than jail terms to completely eradicate the deep-seated tradition.