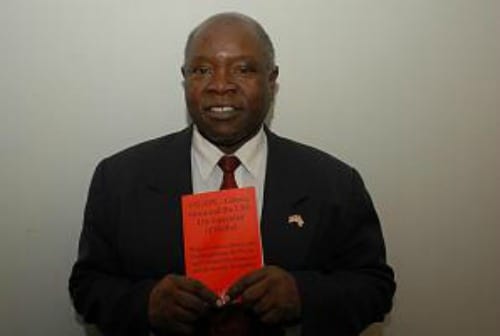 As the Ebola virus continues to ravage particularly Liberia, Sierra Leone, and Guinea of West Africa, there have been several theories as to how the deadly disease made its reappearance. Adding to the theories is one from Liberian-born American professor Dr. Cyril Broderick (pictured) who claims that the United States’ Department of Defense is responsible for spreading Ebola.

Dr. Broderick, a professor of agriculture at Delaware State University, wrote in a prominent Liberian newspaper early in September a letter detailing how the Defense Department genetically modified Ebola and had been testing it on human subjects.

The Liberian Observer ran Dr. Broderick’s allegations in full, where he listed five points of about the disease.

First, Dr. Broderick says that Ebola is a “Genetically Modified Organism (GMO).” Second, he adds that this GMO was tested in the 1970s on human subjects in Zaire.

Third, Dr. Broderick also alleges that the Defense Department via the U.S. Army Medical Research Institute of Infectious Diseases (USAMRIID) and other organizations have selected sites in Africa to secretly test “bio-war” weapons fashioned as vaccinations against Ebola and other infectious diseases.

I am now reading The Hot Zone, a novel, by Richard Preston (copyrighted 1989 and 1994); it is heart-rending. The prolific and prominent writer, Steven King, is quoted as saying that the book is “One of the most horrifying things I have ever read. What a remarkable piece of work.” As a New York Times bestseller, The Hot Zone is presented as “A terrifying true story.” Terrifying, yes, because the pathological description of what was found in animals killed by the Ebola virus is what the virus has been doing to citizens of Guinea, Sierra Leone and Liberia in its most recent outbreak: Ebola virus destroys peoples’ internal organs and the body deteriorates rapidly after death. It softens and the tissues turn into jelly, even if it is refrigerated to keep it cold. Spontaneous liquefaction is what happens to the body of people killed by the Ebola virus! The author noted in Point 1, Dr. Horowitz, chides The Hot Zone for writing to be politically correct; I understand because his book makes every effort to be very factual. The 1976 Ebola incident in Zaire, during President Mobutu Sese Seko, was the introduction of the GMO Ebola to Africa.

In his letter, Dr. Broderick demands that America, Canada, France and the United Kingdom all be held fiscally responsible for the current spread of Ebola. He also contends that African and world leaders address his accusations, citing documents and writings from others as valid sources.

There has not been an official response from Defense Department officials in light of Dr. Broderick’s letter.