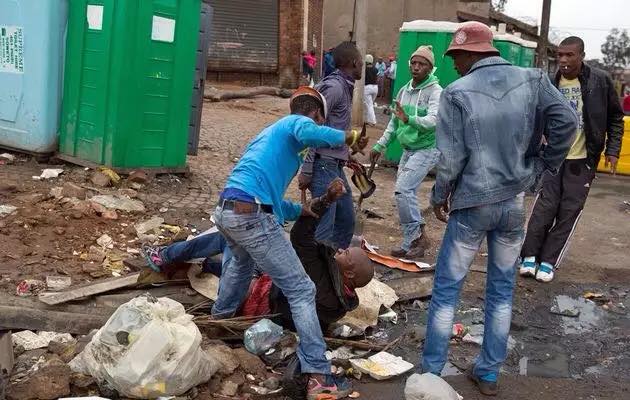 Since South African’s xenophobic attacks began about two weeks ago, seven people have been killed and more than 300 have been arrested. One of the most-recent murders to occur involved Mozambican Emmanuel Sithole (pictured), with South African photojournalist James Oatway catching Sithole’s final moments though his lens.

Sithole was attacked in Alexandria, a township in Johannesburg, by three men, when one clubbed him with a monkey wrench. As Oatway began taking pictures of the attack, though, the men seemed to scatter.

Moments later, though, a man would reappear with a knife, stabbing Sithole repeatedly.

The attack, according to Oatway, lasted no more than two minutes.

Oatway and his colleague would struggle to put Sithole in the back of their car, transporting him to a clinic that was located just on the corner. With the clinic unable to help Sithole, though, they instructed the pair to take him to a hospital.

Oatway and his colleague did as they were told, with Oatway witnessing health care workers attempting CPR on Sithole for at least 30 minutes before declaring him dead.

Of the experience, Oatway says, “I’m sad that he didn’t pull through. I really wish we could have saved him. I’m traumatized, I’m dazed, I’m confused, but I’m also angry with my countrymen.”

Oatway also admitted that since the incident he’s “been thinking about this guy [Sithole] quite a lot.”

Mobs of angry South Africans have been demanding that foreigners “go back to their countries,” because they believe they are taking their jobs.

South Africa has an unemployment rate of 24 percent, and a closer look at the numbers reveal that between 1994 and 2014, Black South Africans saw a decrease in unemployment of just 3 percent (from 43 to 40 percent), with 3.1 million of them still remaining unemployed by last September, according to BusinessTech.

What’s more, the number of Black South Africans who moved from unskilled jobs to skilled (managers, professionals, and technicians) in the aforementioned 10-year period was only 3 percent (15 to 18 percent). Whereas, Whites saw an nearly 20 percent increase in those sectors of employment (42 percent to 61 percent) and Asians experienced an increase of 26 points (25 percent to 51 percent).

Clearly, while Black South African’s frustrations are indeed erroneously being displaced on fellow Africans, the numbers show that even after 21 years post-Apartheid, Black South Africans are still struggling to survive and make ends meet in a system that appears to continue to favor other groups.