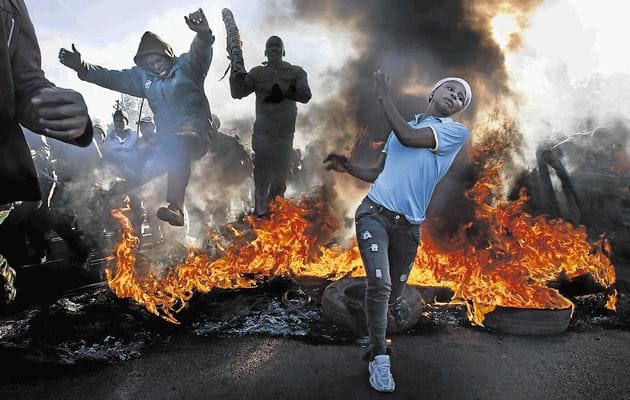 Nigerians, Malawians, Mozambiquans, and Zimbabweans are just some of the foreigners being forced to lock up their businesses and flee to refugee camps as mobs of South Africans in Johannesburg destroy and loot their businesses.

Asians have also been targeted.

And so far, five people have lost their lives in the coastal city of Durban, causing thousands to flee.

“No amount of frustration or anger can ever justify the attacks on foreign nationals.”

Thursday night, more mobs were said to have attacked and looted stores in East Johannesburg, and nearly a dozen vehicles were also reportedly set on fire.

The mobs appear to be made up of young men, with some being videotaped drinking alcohol as they protest.

An unnamed South African shopowner explains the experience of falling in to the crosshairs of the violence as her Nigerian neighbor was attacked.

“They tried to steal everything, they broke into my shop and they took everything, my bed and property. I’m not happy at all, we are all human beings.”

And a Nigerian man told Eyewitness News, “They want us to go, to leave this country for them. We are ready; I’m promising them, if they can give us time to go.”

Still, Deputy Provincial Police Commissioner Theko Pharasi continued to attempt to appeal to the mobs’ humanity, saying, “Whoever is having any intention of doing any wrongdoing, chasing other people out of the country must take note that that is not human.

“A human being will always ensure that you create good relations with other human beings. Where there are differences, there is dialogue, and dialogue actual ensure that we live in peace.”

Meanwhile, the nations of Malawi, Somalia, and Zimbabwe have already begun sending buses to the embattled nation to retrieve their citizens.