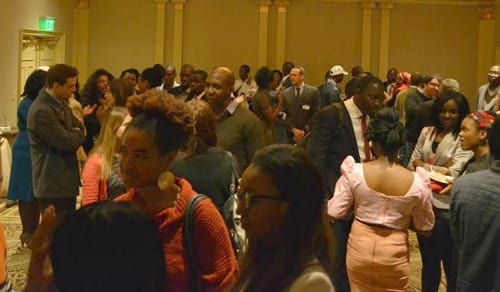 During the torrential downpours in Cambridge, Mass., a coalition of African student groups from various Harvard University schools pulled together for the 5th annual African Development Conference (ADC).

On March 28-29, the ADC brought together a rich range of global policy makers, visionary trailblazers, philanthropists, business leaders, civil society organizations, accomplished academics, and proactive students (just to name a few) who are all extremely passionate about re-branding the image of Africa and enhancing the development of the continent.

With the theme “An Agenda for Africa’s Development: What Do We Want?” as the main focus, this year’s conference was organized in two parts: the “I Am A Professional African” (IAAPA) Networking Mixer and the full-day panel discussions.

The IAAPA Networking Mixer, organized in collaboration with Face2Face Africa on the evening of Friday, March 28, at the Sheraton Commander Hotel served as the official kick-off to the ADC, integrating African professionals of the diaspora and friends of Africa to share progressive ideas and practices for a better future for the continent.

While this was an evening of serious matters related to Africa, the IAAPA Networking Mixer completed the occasion with great music and dancing by DJ Afrik who did not disappoint. He provided excellent African tunes, such as “Limpopo” by KCee and “Skelewu” by Davido — just to mention two artists.

On Saturday, dozens of professionals, conference attendees, panelists, and business leaders filled out the hallways on the first and second floor of Harvard Law School, seizing the opportunity to socialize and network with their counterparts.

The air within the school was filled with the aroma of traditional African cuisines: jollof rice tickled the nostrils as beef and African stew titillated the very souls of all gathered. The food was of the highest standard and would have easily sat on the menu of New York City’s finest restaurants.

Following food, drink, and more networking, the full-day panel discussions took place, with many attendees and participants engaged in meaningful discussions with leaders in the fields of law, government, technology, health, education, design, and media.

Participants addressed topics, such as “Africa and the Media: The Danger of a Single Story,” “African Future Cities: Discourse on Models of Urban Development,” and “Investing in Human Capital Capabilities: The Role of the Diaspora.”

– Olatunde John Ayeni, D.Sc – Chairman of the Board, Skye Bank,