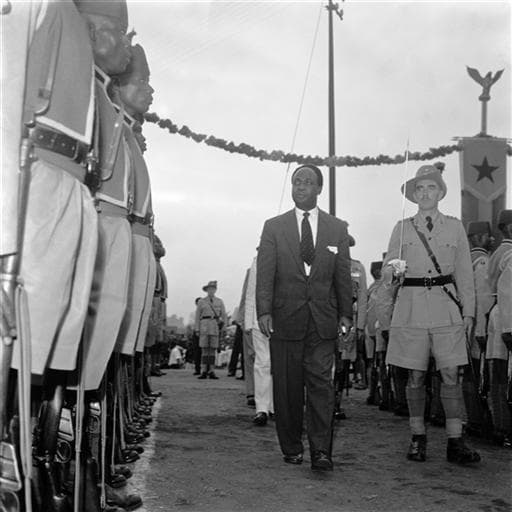 His contribution to the actualization of independence of the “Gold Coast” was legendary and second to none. He, alongside other nationalists, brought the colonial government virtually to its knees. The people loved his forthrightness, charisma, oratory and courage. His popularity soared beyond imaginations. Peasants, trade unionists, market women, cocoa farmers, and other members of society rallied behind him.

Although brutalized, arrested and imprisoned, Nkrumah forged on with relentless vigour until Ghana achieved independence in 1957, becoming the first African nation south of the Sahara to do so (although Liberia proclaimed its independence from the American Colonization Society in 1847).

As the President of Ghana and Prime Minister, Nkrumah put the new nation’s economy, political and social life on a solid footing. His legacies include the construction of various capital projects such as the Akosombo dam; establishment of educational institutions including the University of Science and Technology, University of Cape Coast, several polytechnics and secondary schools; massive infrastructural development, industrialization and giant strides in health and transportation.

He essentially laid the structure for future development, and no Ghanaian president since has been able to achieve as much as he did for the country.

In the international realm, he was a colossus; a political demagogue. More than any other African president, he championed the cause of the black race, especially Africans, and promoted the concept of African Unity. This he proclaimed vehemently in his popular book, Africa Must Unite (1963):

To us, Africa with its islands is just one Africa. We reject the idea of any kind of partition. From Tangier or Cairo in the North to Capetown in the South, from Cape Guardafui in the East to Cape Verde Islands in the West, Africa is one and indivisible.
In spite of his contributions and global acclaim, Nkrumah goofed on several fronts. A promoter of the rule of law and good governance, he received heavy criticism for introducing the Trade Union Act, which made striking illegal in Ghana. Ghanaians saw this as inconsistency on his part, as he had been a major promoter of organized strikes just a few years earlier. Not only this, but he borrowed heavily to fund his numerous capital projects, and this plunged Ghana into serious debt overhang.