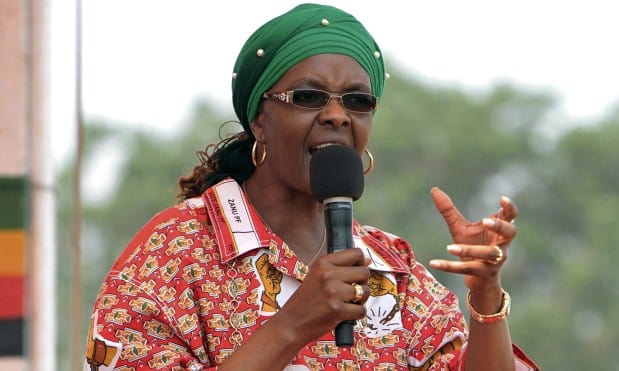 At a recent function, Zimbabwe First Lady Grace Mugabe (pictured) told the audience that her husband and President Robert Mugabe was still in power because God wants him to be, according to Zimbabwe’s News24Wire.

Speaking to a crowd in North Province’s Binga, Matabeleland, Grace reportedly said, “Just ask yourself why God continues giving a 91-year-old strength to lead the country.

Grace then quipped, “Where have you ever seen a 91-year-old who can stand for 2 hours?”

President Mugabe has been president since 1987. A controversial figure, previously, Mugabe served as the nation’s prime minister for seven years after being imprisoned for more than 10 years in jail for waging war on what was then called “Rhodesia.”

Being imprisoned didn’t slow Mugabe down, though.

In 1974, Mugabe was allowed to leave prison by Rhodesian Prime Minister Ian Smith. Mugabe was slated to go to a meeting in Northern Rhodesia but instead escaped and formed a team of soldiers.

Mugabe led this brutal exchange throughout the rest of the decade, which wrecked the nation. Prime Minister Smith attempted to work with Mugabe, but the changeover to Black majority rule would happen with the British Crown observing the shift of power.

Over the years, President Mugabe has often been celebrated for his Pan-Africanist stances; however, many of his detractors contend that he is a dictator and autocrat who insists on holding on to power for life.

By then, President Mugabe will be 94 years old.

Mugabe’s refusal to release power has reportedly triggered factionalism within ZANU-PF, with former Vice President Joice Mujuru being fired in 2014 for allegedly plotting to “eliminate” Mugabe.

In her remarks in Binga, Grace used Mujuru’s firing as a warning to others who are eyeing Mugabe’s post, “This is what destroyed Mujuru. Do not be caught off-side. Tamba nevamwe zvakanaka (play it safe).”

SEE ALSO: In Wake of Chad’s Independence, ‘Unité, Travail, and Progres Must Be Implemented for a Bright Future