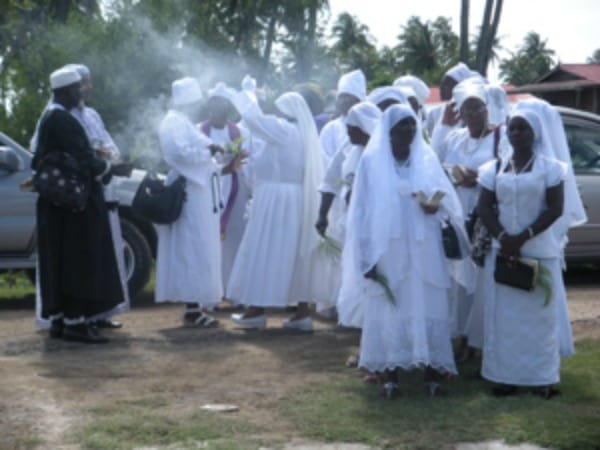 Chattel slavery — but not forced labor — ended in Guyana in 1834. Four years later, apprenticeship, with its compulsory labor for everyone over the age of 6, also ended. And in spite of resistance from the top, Africans took care of themselves, writing a glorious chapter in history of self-organization and local community self-government.

From 1838 to the abolition of the system in 1917, the mainstream of bound, indentured labor came from India. In addition, the 13 multilingual indigenous peoples of the Arawak (pictured). Carib, and Tainos lineages by now had been branded “aborigines” and confined to reservations.

In order to have representation in the colonial institutions of government, one had to be literate, and have education, property, or specific income qualifications for both the right to vote and the right to compete with the representatives of the sugar industry.

The struggle for representation was first led by Guyana-born Whites and then by Portuguese and Mulattoes through a series of reform associations heavily supported by the masses of African villagers.

It took the descendants of the enslaved a period of 58 years before they could elect a financial representative, lawyer A.B. Brown, to the combined court.

This representative was Portuguese and was a part of the first group of indentured servants, arriving in 1835. Their stay on the plantations was rather brief like that of the later arriving Chinese.

The Indian’s ability to elect their first Indian representative much sooner than the Africans explained the big differences in social mobility between enslavement and the period after it.

Another factor that has dogged the struggle against oppression in Guyana has been the issue of whether the enslaved or the indentured suffered more, which is a strange ideological exercise that the oppressed wasted much time on.

H.H. Nicholson, who experienced racism in Europe for 25 years as a multidisciplined science and language student, used to say, “Let us say that we suffered equally.”

For the gradual step-by-step extension of the right to vote in government elections, the working people and the unemployed followed the lead of the radical middle class professionals and businessmen for reform who wanted voting to be accessible to voters and for there to be less requirements for those who wanted to run for a seat as an elected representative.

After World War I and the October Revolution, Hubert Nathaniel Critchlow began to agitate on the waterfront among his fellow dock workers. The fever spread beyond the ranks of the employed workers and attracted the general body of the rural urban poor.

As a historic aside, there was another Nathaniel coming to light in another theatre of life at the same time and in the same country. His name was Nathaniel Jordan, and he preached a grassroots liberation theology.

Most people identified the movement he inspired with Sabbath, fasting, and prayer as well as the white, flowing robes the members wore daily (pictured at top).

Jordan’s movement was a cultural challenge to Euro-Christianity not equaled since the repression of Comfa, the expression of voodoo in Guyana. People called the new faith the “Jordanaites,” but its proper name was West Evangelical Millennium Plgrims….