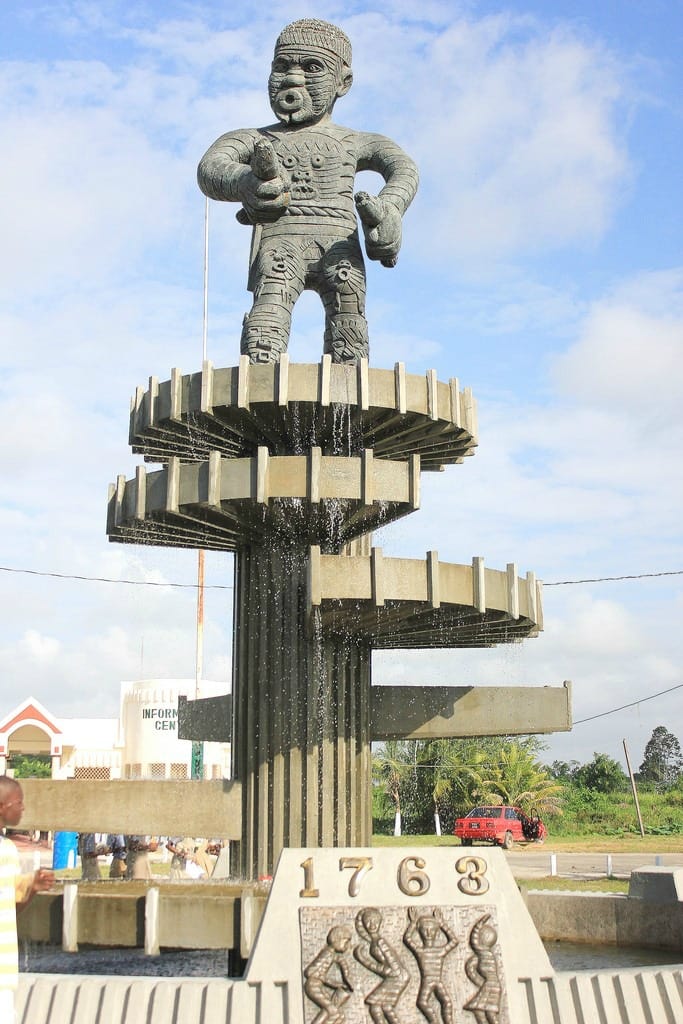 1763 Monument in Georgetown, Guyana. Dedicated to the African Slave Cuffy (Kofi) who lead the 1763 Slave Revolt on 23 February, 1763 from his base at Plantation Lilienburg, along with his deputy Akara. Cuffy’s army of African slaves overthrew the Berbice governor van Hoogenheim and Cuffy ruled as the Governor of Berbice.

The cotton mills in Great Britain were hungry for raw materials so that the owners could multiply their profits and  expand.

This would be possible with cheap labour and most possible with forced labour costing only enough to keep the slave population eating, toiling, and not being free to marry but free to have  children born in to cotton or later sugar plantation slavery.

Enslavement — plantation style — in the three Guiana colonies meant that language, family, and religion were all criminalized. Resistance from the Africans to “all God’s dangers” was  ever present.

Consequently, Guyana’s Big One (slave uprising) took place in 1763, a decade before Haiti’s first Big One.

The people of Haiti ended their ordeal as human property in 1794, effectively exploiting the French revolution.

Thirty-five years after Haiti (1834), the chattel system also collapsed in the British West Indies (Caribbean), and while the laborers were no longer property, they were forced to work like property until 1838.

A book soon to be published with Dr. David Hinds interviewing me on the period shows what the Africans did with their lives.

In 1834, Africans numbered about 84,000 and were the largest racial group, because they were essential to plantation production.

The handful of plantation owners were compensated according to the number of  laborers they had been “deprived of,” and beyond emancipation, the laborers still have an outstanding debt due to them and their descendants.

And so strange was  the spectacle  of Whites doing anything but overseering that Africans called them “White n*ggers.”

Therefore, the labor force and the population increased partly because of immigration of indentured laborers from the West Indies, from Africa — and starting in 1838 — from India, which became  the largest source.

Those who do not  understand how it was possible for adventurers to politicize in Guyana may find Walter Rodney‘s “History of the Guyanese Working People” and Clem Seecharan‘s works  instructive.

In 1966, Guyana became independent,  with all of the typical colonial legacies to its debt, and in addition, it also had the misfortune of becoming a bone of contention in the Cold War….