Have you ever been to Lagos, Nigeria? Yes? Then you must be familiar with the buzzing Lagos traffic and how Keke NAPEP (tricycles) weaves in and out of the traffic faster than cars yet slower and a little less dangerous than motorbikes. Beyond every other means of transportation, they are mostly a good shot at avoiding traffic and ensuring less chance of motor accidents.

Keke NAPEP (Keke for short) is the nickname for commercial tricycles in Nigeria and it is increasingly becoming popular in every state of the federation, especially states that banned the operation of motorcycles. Aside from enabling easy boarding and alighting, Keke gives an exciting and breezy experience and very affordable because it consumes less fuel than actual cars.

Matattu, an app launched by a Nigerian Harvard graduate, Samuel Ajiboye, has joined the rest of e-hailing platforms such as Uber, Taxify in providing on-demand transportation network for hailing transportation services online, only that this time, it is Keke and who knows tomorrow, bikes could get involved.

Like Uber, Taxify and every other ride-hailing platform, on Matattu, you sign up, set your location and your destination, with your GPS turned-on of course, and your Keke driver will join you ASAP! The app also displays the payment estimation of your ride even before you hail the ride, and you can pay with cash or card, whichever works for you.

The company has its own fleet of tricycles (which is a departure from the existing e-hailing model), but it allows for 3rd-party tricycle owners to come on board by either signing up as drivers on the platform — provided your tricycle meets the specified standard — or giving out tricycles to available drivers and getting cash returns. Talk of creating jobs and increasing GDP.

Matattu needs all the investment it can get to keep up. Although Samuel affirms that Matattu’s partnership with Tricycle Owners and Operators Association of Nigeria (TOOAN) has afforded them additional 10,000 standard tricycles, they are still open for investors in other to hit their goal of having 20,000 tricycles on-board before the year runs out. But that can only happen if the company goes beyond their present resources.

Their involvement with FleetPartners, a vehicle leasing and fleet management company, is to ensure that management and maintenance of the fleet, as well as investments — especially for investors who might feel overwhelmed with estimating their own potential Returns on Investment (ROIs) wouldn’t pose a challenge.

Investors are guaranteed necessary returns on their investment while Matattu itself charges 20% on every transaction and drivers have the opportunity to double their usual daily earnings.

Innovative as Matattu is, there are lots of concerns with Kekes. Besides restricted routes, there are speculations that the Lagos State government might be considering taking them off the road, just like what happened to motorcycles some time ago.

But during the signing of Matattu’s agreement with the TOOAN on Monday, December 4, 2017, Samuel,  who doubles as the Chairman of the association and founder of Matattu, explained why this shouldn’t be a concern.

“If the government shuts down Kekes, we look at alternatives and how we can restructure the system. However, when you have a structured system such as this, it might encourage the government to change their mind. One of the reasons the government moves for such is that a lot of persons use these Kekes for criminal activities. And worse still, there is no database to track these perpetrators. Moreover, we have a similar transport model in India, and something similar has been deployed even in Europe. However, we are always ready to change and abide by government’s laws,” he said 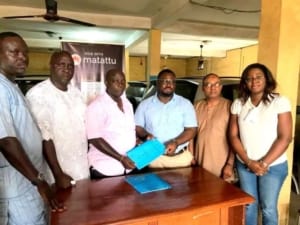 Kekes already have restricted routes in Lagos, which casts doubts about their operational model. How do I know when my destination is beyond the Keke’s route? Will the app tell me? Will the app have a list of routes my Keke can and cannot ply? Will the driver cancel my trip after calling to let me know?

The Matattu app is available for download on the Google Play Store, and a quick look at it shows that the company is planning for expansion as well.