Once again, the prize committee of the Mo Ibrahim Foundation has not found anyone worthy of its $5 million prize for former African leaders who displayed outstanding leadership, reports the Simon Ateba News. The committee found itself in a similar position in 2015.

To qualify for the Ibrahim Prize for Achievement in African Leadership, candidates must have been democratically elected to serve as head of an African state. In addition, they must have completed their constitutionally mandated terms and must have left office within the last three calendar years. Most importantly, the winners must have demonstrated exceptional leadership skills during their time in office.

Former presidents Goodluck Jonathan of Nigeria, Yayi Boni of the Republic Benin, and a number of other leaders who left office within the last three years were thus eligible for the prize. However, the prize committee, renowned for its exceptionally high bar, chose to snub them all.

Goodluck Jonathan in particular was acclaimed largely for conceding defeat and peacefully handing over power to Muhammadu Buhari when he was defeated in last year’s general elections. His action is supposed to have helped entrench democracy in Africa’s most populous country; his supporters widely considered him good enough to win the prize. Unfortunately, his time in office was severely tainted by allegations of widespread corruption and profligacy. 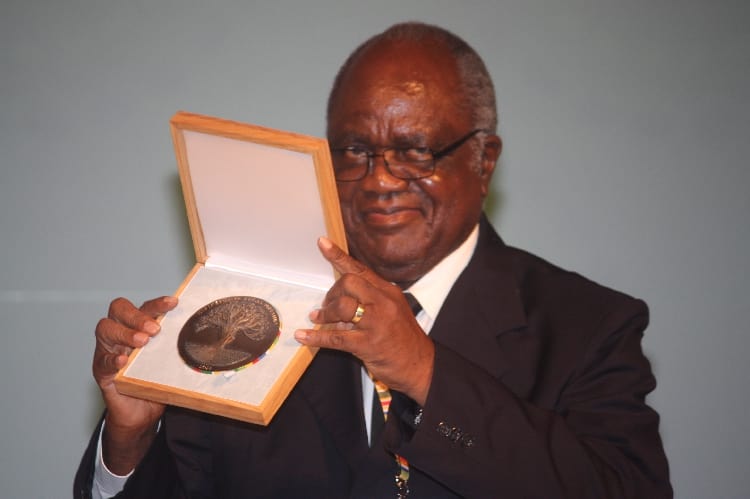 Former President of Namibia Hifikepunye Pohamba was the recipient of the Ibrahim Prize in 2014.

The Ibrahim Prize was established by Sudanese businessman Mo Ibrahim in 2007 to highlight exceptional role models for the continent and celebrate African leaders who have developed their countries, lifted people out of poverty, and paved the way for sustainable and equitable prosperity.

In all, only 5 African leaders have been considered deserving of the prize: Joaquim Chissano of Mozambique in 2007, Festus Mogae of Botswana in 2009, Pedro Pires of Cape Verde in 2011, Hifikepunye Pohamba of Namibia in 2014, and Nelson Mandela of South Africa, who was conferred with an honorary prize in 2008.

This year makes the fifth time in all that the foundation has declined to select a winner .

The Mo Ibrahim Prize is the highest paying award in the world, even dwarfing the $1.3 million given to Nobel Peace Prize winners. A winner of the Mo Ibrahim prize is entitled to an initial $5 million payment, and an additional $200,000 a year for life.