A week after 300 students were sent home from a school in Ruziba, Burundi, for allegedly defacing a portrait of the embattled President Pierre Nkurunziza, another school in Gisuru District has expelled 230 students for the same offence.

Local government officials say the school was ordered to expel the students after they refused to denounce those responsible for violating photos of Nkurunziza, whose decision to hang on to power for a third term has led to civil unrest, claiming more than 400 lives and displacing thousands more.

“We gave them the paper on which they write the names of offenders, but they gave us blank sheets,” Aloys Ngenzirabona, a local government official told AFP.

Teachers at the school say they discovered the defiled photos in about 40 textbooks last week. National intelligence and police have since taken over the case.

According to officials in the Ministry of Education, dozens of schools across Burundi have experienced similar incidents of students scrawling insults all over the president’s portraits and even gouging out his eyes.

The first cases of defaced pictures of President Nkurunziza were reported in a school located south of Bujumbura, in an area considered to be the home turf of Burundi’s main opposition leader Agathon Rwasa.

The alleged affront by secondary school pupils is viewed as a silent protest against the president’s decision to run for office in April last year.

A week ago, students in Bujumbura took to the streets to object the arrest of their colleagues for defacing Nkurunziza’s photo. The protests turned ugly after police reportedly opened fire on the students, leaving one student and a taxi driver with serious gunshot injuries. 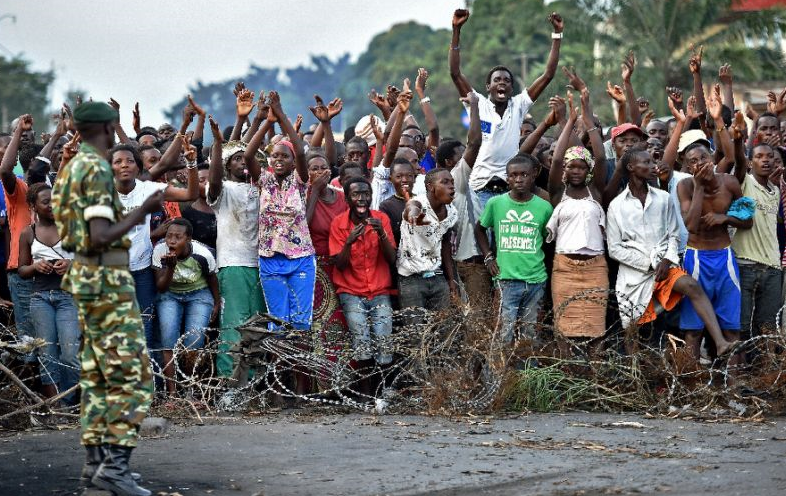 Students in Bunjumbura, Burundi, protesting the arrest of their colleagues for defacng photos of President Nkurunziza. gdnonline.com

Since the current civil strife in Burundi begun in April 2015, a number of popular radio stations have been closed and many journalists forced into exile in what is seen as the government’s attempt to hide the realities of the ongoing war.

At least 100 journalists have been forced out of Burundi in the last one year, according to the Guardian, leaving social media tools such as WhatsApp, Twitter and Facebook to fill the vacuum. Burundians are now relying on their mobile phones for real-time information on possible raids, arrests and attacks.