Gambian President Yahya Jammeh has promised to attack Senegal over its president’s alleged support of Gambian dissidents in destabilizing Gambia.

Speaking to Jeune Afrique (Africa’s French magazine) on Tuesday, President Jammeh accused his Senegalese counterpart, President Macky Sall, of supporting rebels from Gambia and allowing them to use Senegalese media to spread propaganda.

“I have sent him a message and I was very clear: if they attack the Gambia, I will attack Senegal; I’m ready!” President Jammeh told Jeune Afrique.

This warning comes a week after a former Gambian soldier narrowly escaped death during an attack allegedly carried out by armed militia sent from Gambia to assassinate him.

According to Africa Review, the runaway soldier told Senegalese media that he fell out with the Gambian President after he was accused of plotting a coup.

The unrelenting counter-accusations between the two heads of state have led to diplomatic arm-twisting, with Senegal recently closing its border with Gambia in alleged protest over President Jammeh’s remarks that President Sall is a puppet of the West. 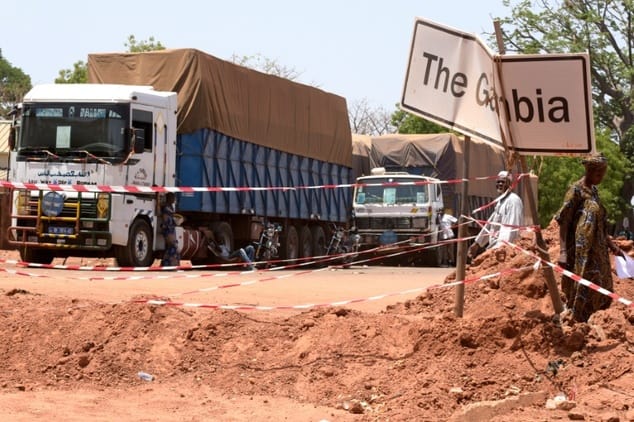 Prior to the closure, there were reports that Gambia had occupied Tranquill, a Senegalese border village, with President Jammeh deploying his military troops in the area, saying it was part of The Gambia.

According to Freedom Newspaper, the Senegalese population is angered by President Jammeh’s continued insults against their head of state. Many believe the Gambian leader has crossed the diplomatic line. A large number of Senegalese journalists and political analysts have censored Jammeh, agreeing that his conduct is disgraceful.

Many Gambians and members of the international community have accused the 51-year-old President Yahya Jammeh of dictatorship, citing numerous cases of intimidation, torture, and forced disappearance of members of the opposition.

Recently, President Jammeh has been under severe condemnation over the mysterious death of Mr. Solo Sandeng, who served as the national organizing secretary of Gambia’s main opposition party, United Democratic Party.

Sandeng died in police custody in April this year after being arrested alongside six other opposition leaders in Gambia’s capital Banjul. The family initially heard rumors of his death via social media, but government officials would not confirm. Sandeng is believed to have died a few hours after his arrest, with reports indicating that he may have been tortured and murdered. According to Amnesty International, the other six UDP detainees were severely beaten.

Jammeh has been in power since 1994 when he overthrew President Dawda Jawara in a military coup, with reports indicating that he may be seeking a fifth term in office come December.