Ida B. Wells-Barnett stands as one of the most accomplished figures in African-American history, becoming a champion of women’s and civil rights. The Mississippi native died on this day in 1931, but not before blazing a variety of trails.

Wells-Barnett was born to enslaved parents in the town of Holly Springs on July 16, 1862, a year before President Abraham Lincoln would sign into effect the Emancipation Proclamation. Wells-Barnett’s father attended Rust College (then known as Shaw University) but had to end his studies to care for his family.

Wells-Barnett followed her father’s footsteps by attending Shaw as well, but tragedy hit as she lost her parents and a 10-month-old brother to yellow fever. Wells-Barnett dropped out of college to care for her family, but found work as a schoolteacher with an all-Black elementary school. During her summer breaks from teaching, Wells-Barnett attended Fisk University.

Wells-Barnett was presented with an opportunity to write for a series of Black-owned newspapers with a focus on race issues. In 1889, she became the co-owner of the “Free Speech and Headlight” newspaper, which had an anti-segregationist angle.

A tragic event in 1892 would define Wells-Barnett’s career: The lynching of her friends, Thomas Moss, Calvin McDowell, and Henry Stewart, who all owned the People’s Grocery Store, angered Wells-Barnett and sparked her to investigate other similar lynching cases. 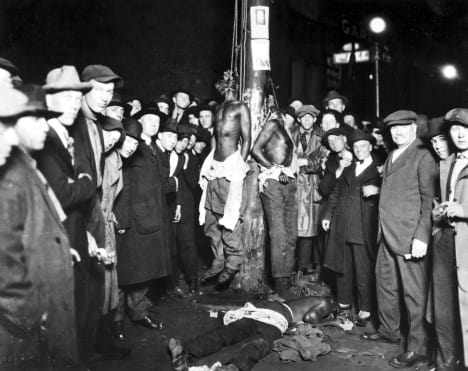 Lynching (pictured), which was at its peak during the 19th century, is the practice of a mob murdering an individual in an effort to intimidate and/or terrorize a group of people. Lynchings usually ended in hangings, shootings, and/or burnings at the stake. Sadly, African Americans found themselves the targets of lynchings in the United States at aggressive rates.

By way of her investigation, Wells-Barnett launched an anti-lynching campaign. She later published her findings in a pamphlet titled “Southern Horrors: Lynch Laws in All Its Phases.”

An excerpt from “Southern Horrors” reads:

Eight negroes lynched since last issue of the Free Speech one at Little Rock, Ark., last Saturday morning where the citizens broke(?) into the penitentiary and got their man; three near Anniston, Ala., one near New Orleans; and three at Clarksville, Ga., the last three for killing a white man, and five on the same old racket—the new alarm about raping white women. The same programme of hanging, then shooting bullets into the lifeless bodies was carried out to the letter.

Nobody in this section of the country believes the old thread-bare lie that Negro men rape white women. If Southern white men are not careful, they will overreach themselves and public sentiment will have a reaction; a conclusion will then be reached which will be very damaging to the moral reputation of their women.

Wells-Barnett worked alongside social reformer and orator Frederick Douglass in an organized boycott of the World’s Fair in Chicago. Irvine Garland Penn, Ferdinand Barnett, Douglass, and Wells together penned a pamphlet titled “Reasons Why the Colored American Is Not in the World’s Columbian Exposition,” which reportedly reached the hands of 20,000 people and showcased the progress of Black Americans.

Wells-Barnett settled in Chicago, marrying Ferdinand L. Barnett with whom she had four children and also co-owned a newspaper. Wells-Barnett had issues balancing her home life and public work, but she still lectured in America and Europe before settling down to home life.

Wells-Barnett died of kidney failure and was in the midst of completing an autobiography.

Her legacy as a devoted journalist and civil rights activist remains potent as ever, standing as America’s most vocal leader against the heinous practice of lynching.

SEE ALSO: Revolutionizing Antiquated Systems of Education in Brazil, Beyond