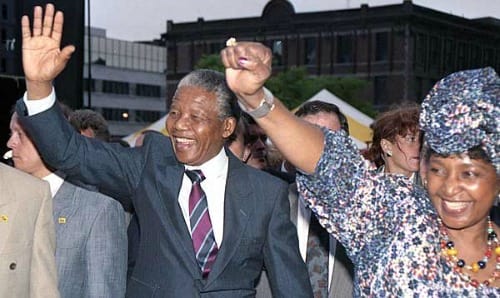 The late-Nelson Mandela (pictured left) and his second wife, Winnie Madikizela-Mandela (pictured), were the vision of strength and unity for many in the country of South Africa and the world. Married in 1958, the couple, though, was torn apart after the African National Congress leader was arrested in 1962. On this day in 1996, a highly publicized two-day trial would result in an end to their 38 years of marriage.

Successfully evading police while on the run and engaging in political activities in the late ’50s and early ’60s, Mandela says his carelessness led to his arrest. Initially charged with inciting worker strikes, Mandela was swept up in the anti-Apartheid fervor behind the Rivonia Trial between 1963 and 1964 and was charged alongside his comrades with conspiracy against the South African government.

The Mandelas remained married throughout the ordeal, and there seemed to be a genuine bond of love when the leader and global icon was released from prison in 1990.


Watch a video on Nelson and Winnie Mandela’s love here:

Mandela held his wife’s hand as he left prison on that November day, but the couple separated two years later. Despite his wife’s visible presence in the African National Congress (ANC) and her anti-Apartheid work in the county, Mandela requested a divorce in 1996 citing “irreconcilable differences.” 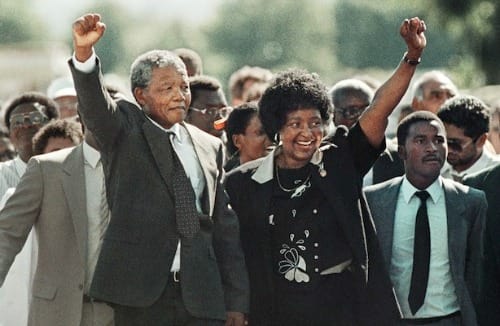 Madikizela-Mandela was accused by her husband in court of carrying on an affair with a lawyer, Dali Mpofu, in the ANC, which had a touch of irony considering that was her husband’s role in the organization when they first began courting. During the divorce trial, Mandela said that he was often ignored by his wife and was determined to end the union by any means available. Madikizela-Mandela was said to have protested the trial, but quietly accepted defeat as deeply intimate details of their broken marriage leaked to the public.

Madikizela-Mandela conceded to the judge’s ruling in favor of her husband, and the dissolving of their marriage took place. She did, however, request for more traditional means of repairing the marriage, such as meeting in front of tribal elders.

Mandela did say his wife endured too much as a result of his 27 years away in prison and praised her for keeping the spirit of his movement alive. Yet, Mandela was reportedly crushed by the discovery that Madikizela-Mandela was having an adulterous affair. 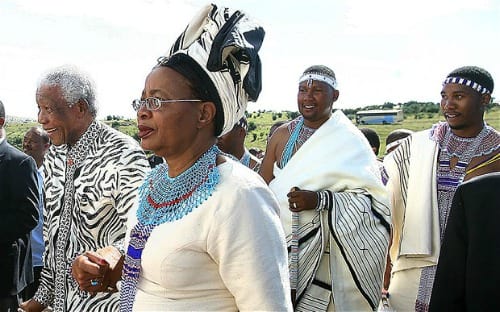