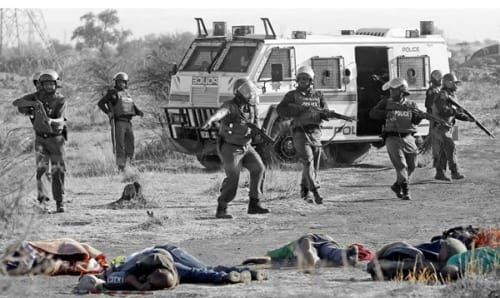 The Sharpeville Massacre of South Africa (pictured) stands as one of the police’s most-heinous displays of violence against demonstrators during the period of Apartheid. The event happened on this day in 1960, which is now celebrated as a day of remembrance across the nation and calls global attention to the divisive segregation in the land.

In protest of the Pass Laws, a passport system enacted under Apartheid to further segregate the population, thousands of Black protesters took to the streets to combat the racist law. Initially, the Pass Laws were put in to effect in the 1920s and only targeted Black South African men, but eventually, they were extended by the Apartheid-supporting National Party leader Dr. Hendrik Verwoerd to also target and harass women.

The African National Congress (ANC) planned a protest in April of that year, hoping to work within the law to get Apartheid abolished; rival anti-Apartheid group the Pan-Africanist Congress (PAC) jumped ahead with its own protests 10 days before the ANC’s scheduled march because it felt they would win the day.

Marching in Sharpeville, the group descended upon the local police station and allowed themselves to be arrested for not carrying their “passbooks” or passports. The numbers vary, but a reported 5,000 to 10,000 appeared in the township. According to rumors, the PAC may have used aggressive coercion tactics to get civilians to attend.

Although the demonstration was mostly peaceful, the mood darkened once police called in armed reinforcements.

The crowd reportedly grew to 19,000 and began throwing rocks at the police. According to all accounts, none of the protesters carried weapons, though.

The police opened fire, after tear gas and baton assaults failed to control the crowd. Around 300 persons were shot, leaving 69 dead and 180 injured.

Police claimed that young, inexperienced officers were the catalyst for the tragic event, but an investigation in 1998 yielded possibilities that the police firing their weapons was ordered by superiors.

News of the massacre traveled around the country, and across the globe.

Riots broke out in the nation, leading to the arrest of more than 18,000 people, including many who were anti-Apartheid activists. The global response to the massacre led to the United Nations removing their support from South Africa.

Another by-product of the massacre was the shift between peaceful protests and the armed wings of the ANC — known as the Umkhonto we Sizwe, of which Nelson Mandela was a part of — and the PACs The Azanian People’s Liberation Army (APLA) or Pogo.

Since 1994, March 21 is celebrated in South Africa as Human Rights Day.