Last Saturday, WikiLeaks published a leaked document from the International Monetary Fund (IMF) which may have reopened old wounds and evoked bitter memories of the Fund’s intervention programmes in Africa and other regions of the world.

The Greek economy has been under severe strain as a result of the country’s multi-billion debt accumulated after the 2008 global economic crisis. The IMF, European Central Bank and Eurozone nations sealed a deal with Greece last summer, approving a third bailout package of around $97 billion in exchange for unpopular austerity reforms.

The Wikileaks document revealed a conversation held on March 19, 2016, between two IMF officials in charge of managing the ongoing Greek debt crisis: Poul Thomsen, the head of the IMF’s European Department, and Delia Velkouleskou, the IMF Mission Chief for Greece. According to Wikileaks, “Thomsen said internally that the threat of an imminent financial catastrophe is needed to force the other players into a ‘decision point.'”

Shortly after the transcript of the phone call was published, Olga Gerovasili, the spokeswoman for the Greek government asked the IMF to explain whether it was planning to coerce Athens into adopting new austerity measures. 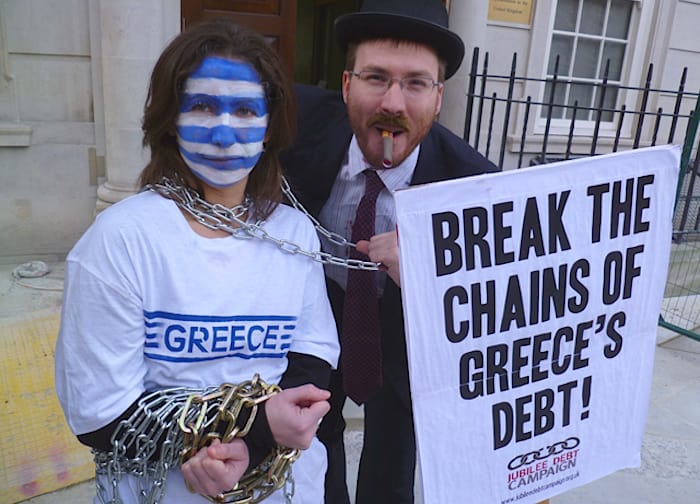 Greek citizens dramatize their outrage with IMF policy for their nation. (Photo: greekreporter.com)

The Fund has declined to comment on the said publication, claiming that it anticipates a possible default from Greece:

“We do not comment on leaks or supposed reports of internal discussions. We have stated clearly what we think is needed for a durable solution to the economic challenges facing Greece, one that puts Greece on a path of sustainable growth supported by a credible set of reforms matched by debt relief from its European partners”, the IMF said in a statement.

In other words, it is the same old tactics of international creditors like the IMF, aligning with and weighing heavily on the side of creditors in an attempt to bully the Greek government into total submission to their whims and caprices.

Grieve Chelwa, PhD candidate in Economics at University of Cape Town, South Africa noted that Greece’s experience with the troika (IMF, European Central Bank and the European Commission) is yet more confirmation of what the Africans have been saying about how punitive austerity measures are:

“The Greek economy has contracted by about 25 percent since the Troika began effectively calling the shots in Athens around 2010. The austerity pill was administered for far longer in most parts of Africa, starting around the late 1970s and running all the way through to the 1990s. Only the heavens know the magnitude of the wreckage that this left in its wake,” he added.

In the 1980s and 1990s, a number of African countries were grappling with the one-size-fits-all Structural Adjustment Programme (SAP) which was foisted on them by the IMF and World Bank, just like what Greece is going through at the moment.