Ouidah is a 42 kilometers stretch from Cotonou, the commercial capital city of the Republic of Benin, West Africa. Ouidah is a word that — whenever mentioned — gives chills of voodoo down the spine of the scary land of necromancy.

This part of the country holds a few creeks, bodies of running water, streams, swamps, and the Atlantic Ocean, which itself holds a remarkable history of slave harvest, and the slave stock market, or trading. Ouidah is quieter and less dusty than Cotonou, and most of the streets run across each other, paved with floor bricks of a quality cast.

The houses are mostly built close to one another and carry the 1800s Portuguese or Franco-Brazilian styles. Ouidah also appears less populated since many of its locals have deserted the city and migrated to Cotonou in search of a better life.

In this personal account, I went to Cotonou, with the keen energy to see Ouidah, considering all the research from publications on the slave trade, aforementioned voodoo, and Python Temple.

Below is my visit to Quidah: 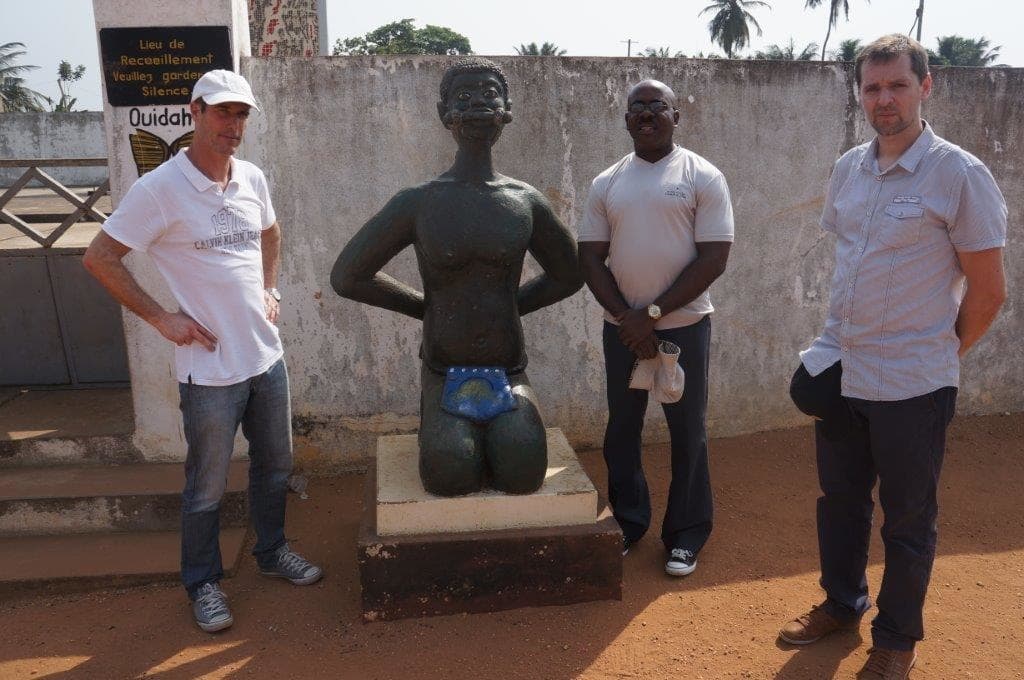 Me (middle) with Alan and Luc

A group of French nationals and I agreed to team up to discover Ouidah. Immediately, we were acquainted, and I was introduced to Alain, Luc, and Jacob. People shook hands and smiles of welcome were exchanged, and the chauffeur navigated us through a beautiful road and a nice toll gate of smiling staff.

In no time, we were right in Ouidah. After disembarking, the first step was to get permission and give a presentation of our purpose to the Ouidah Department of Tourism. Subsequently, a tour guide was assigned to aid us through the tough corners of a spine-chilling adventure.

The first Christian church is where the statue of the first priest in Africa is made visible and seems ever adored by Christians from this part of the continent. 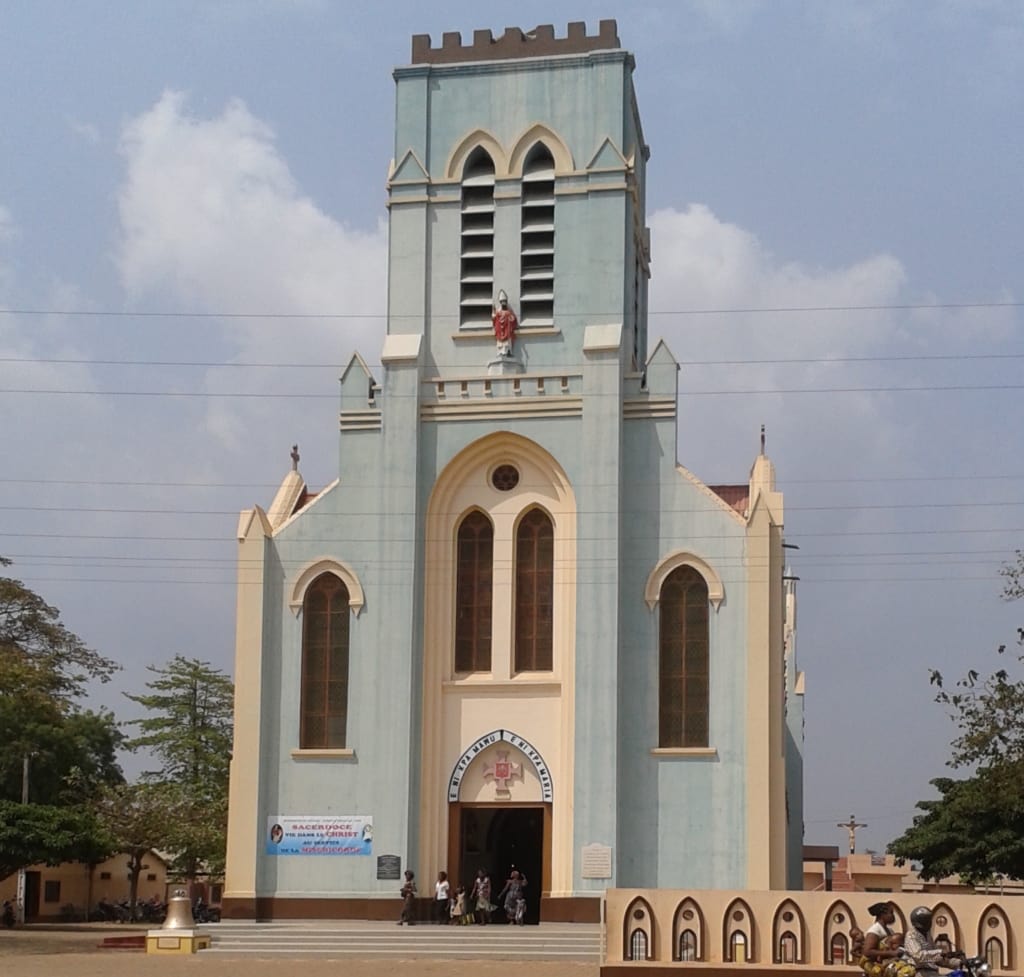 In this temple there are hundreds of pythons of different sizes freely moving around. Most of the time they are sleeping and appear peaceful and friendly as evidenced by many visitors of different backgrounds hanging or tossing them across their necks.

Voodoo is a religion just like any other. There are people with strong beliefs or convictions originating from Python; in fact, our tour guide told us that he comes from Python and worships the python. 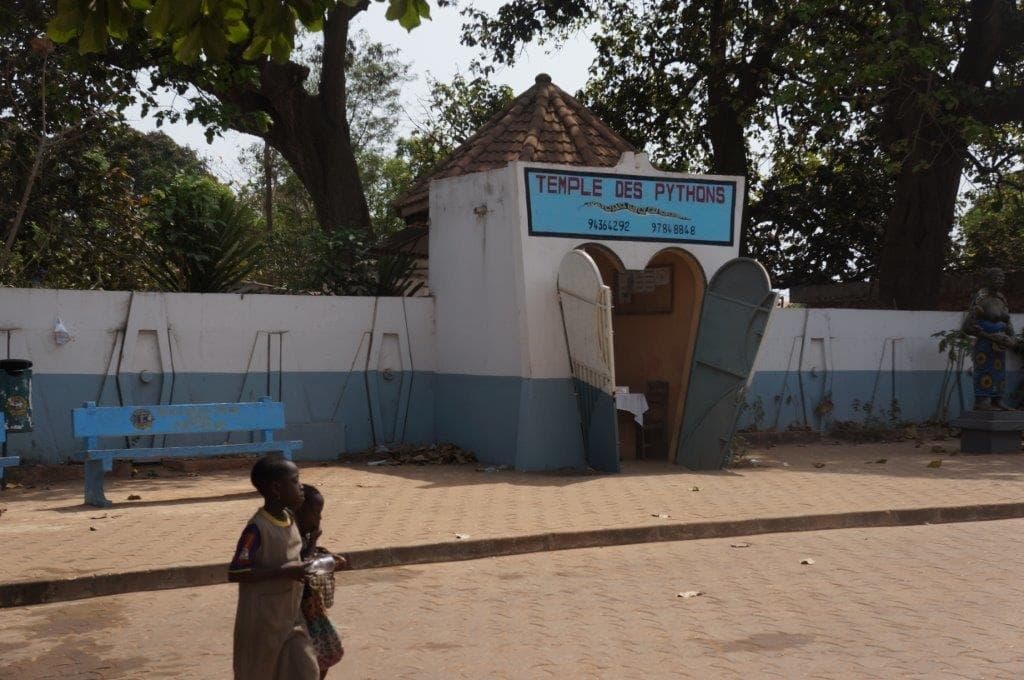 Besides the Python cave, there are a couple of shrines that are being fed on a ritual basis with 60 red roosters or more, depending on the festival. Some individuals who consulted shrines, such as that of the sun god, eventually saw that their prayer request was honored. Afterward, they returned to reconnect with the center, and libations were poured and sacrifices were offered to the gods.

The temple is guided by a high worshiping priest who sits in to appease the gods should transgressions occur. He also handles government or other essential governing authority requests.

Our next stop was the beginning of our eye-opening adventure. A Portuguese Catholic priest missionary-turned-slave trader who had amassed massive wealth out of the lucrative business, made his front house an assembling point for the local slave hunters who screened slaves on arrival. The screening involved teeth inspection, eyes, ears, and level of fitness.

According to history, Fr. Ferdinando outfitted himself with many African wives while participating in a ritualistic lifestyle that purportedly supported his steady growth in the slave stock market.

As the sole dealer, Fr. Ferdinando decided slave hunters’ wages and also determined the price tag on the stock itself with other rich Portuguese, Danish, and Italian slave buyers and sugar plantation owners.

The priest’s footprints are still evident in Ouidah as his descendants have large families. His personal house is now a museum available for visit by special permission or arrangements. 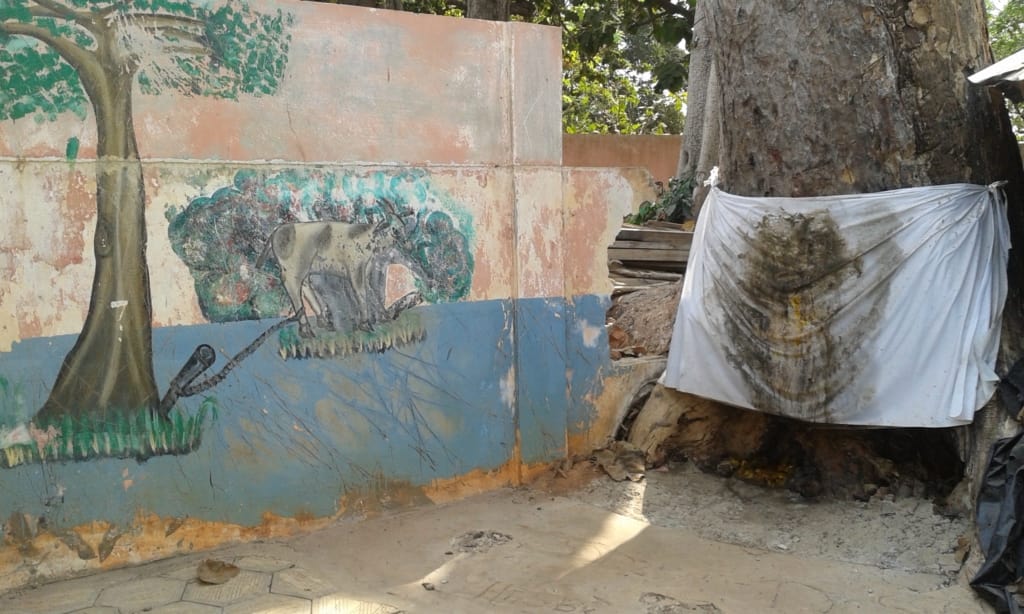 Next was a stop to the pictured tree, which is two kilometers from the slave screening point. What exactly took place here is total cruelty to the human race and could make anyone shed tears.

After the screening point, slaves were brought to a tree called “Tree of Memory Loss,” where slaves destined for market were made to walk around this particular tree endlessly, either spinning with rituals hovering over their heads and/or concussions.

The purpose of spinning around the tree was to force captured slaves to forget about their origin, who they were, and what happened to them. The screening point and “tree of memory loss” connects in same way to the “door of no return” at Senegal’s Goree Island.

At this point, slaves who were approved or selected as quality stock would go through body inspection, including teeth, eyes, frame composition, and gender classification, for the second time. In addition, the loading plan began, involving hand and neck cuffing, chaining, and whipping. 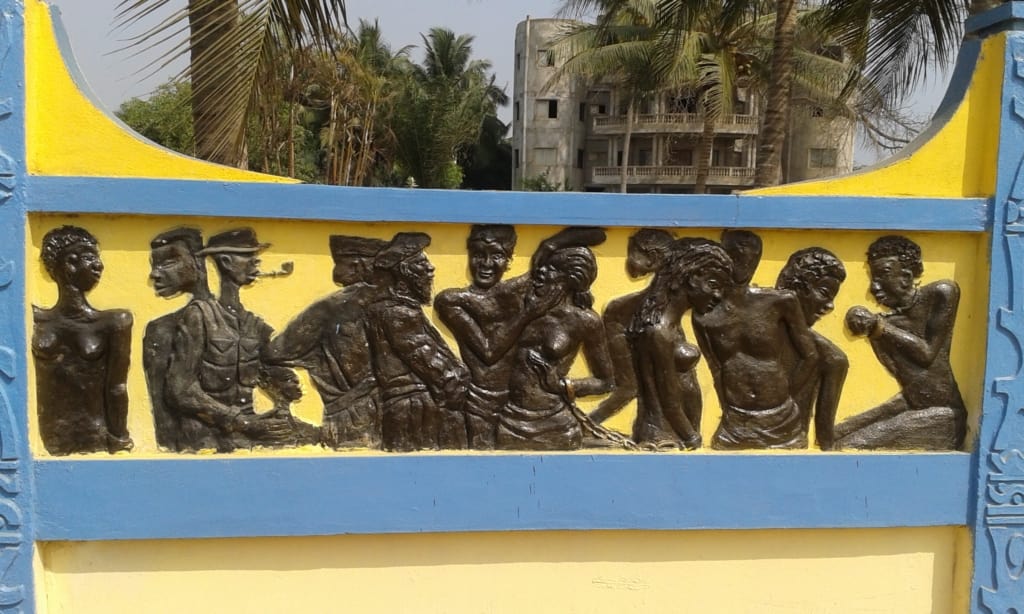 Here, slaves were inspected for “fitness” before being exported off.

From the extreme body inspections to the chaining process, the slaves were made to spend about 14 days in a dark house or room without any sort of ventilation — a strategy to get them accustomed to life in the cargo vessel that would be their home for the next three to six months on the voyage.

In that cast room, 700 to 1,000 slaves were cramped together with no toilet nor any kind of facility. The rebellious ones were beaten and muffled with a lock made out of log tied to their lips with their hands cuffed backward.

Those who couldn’t make it, gave up their ghost.

A cemetery for those who passed away was five blocks away. At this cemetery, their spirit was free and that is why the place is called “FREED SPIRIT.” Here, every visitor is asked to spend a few minutes of silence in honor of the slaves’ resilience. 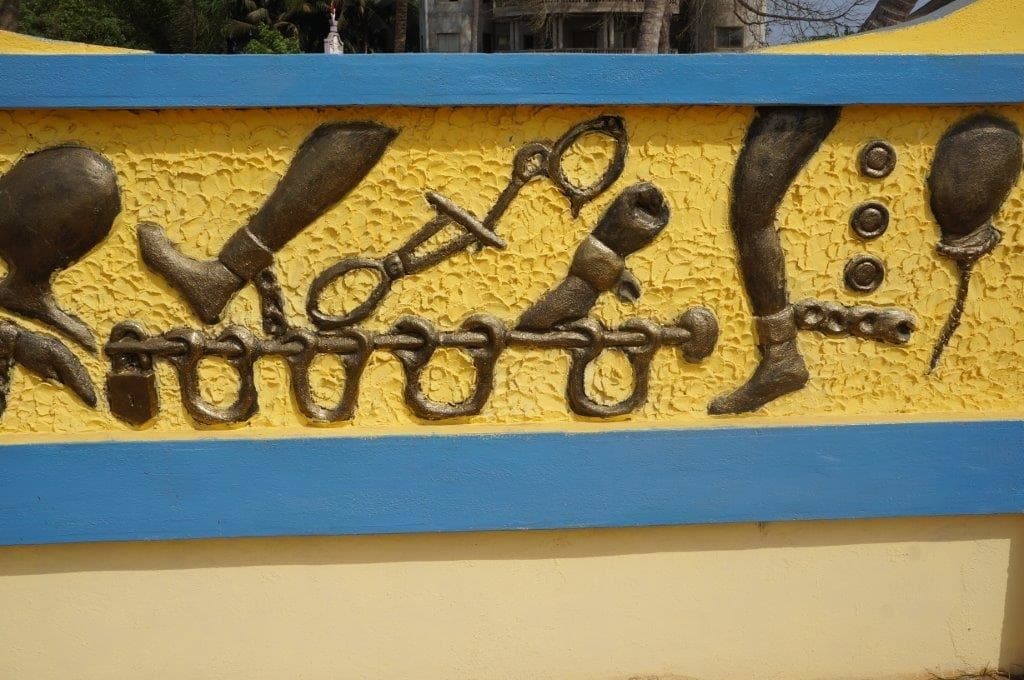 The slaves were chained together before the voyage

7th Stop: The Gate of No Return

The slaves that walked about 11 kilometers from the point of screening boarded a vessel of from their final point from Africa to an unknown world with uncertain survival. At the shore, farewell rituals were carried out to appease the so-called MamiWater (Mermaid), a water spirit believed to possess extreme powers to upset movements and more. 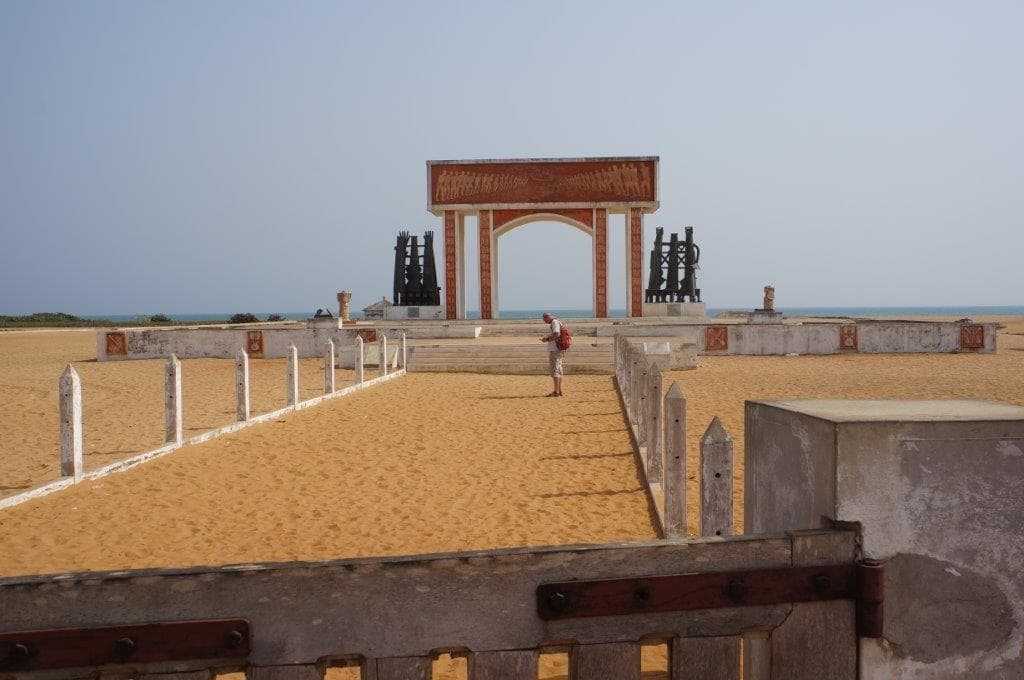 Gate of No Return

Today, the United Nations Educational, Scientific and Cultural Organization has done a remarkable job in preserving these sites and keeping history alive. At the “gate of no return,” visitors from all over the world flock to discover the nightmare that targeted Black Africans. Ph.d. candidates from France and the United States as well as writers from other parts of the world can be seen recording and documenting the actual ordeals of these Africans.

The experience at Ouidah makes holding off tears impossible, particularly for nationals from Liberia and South Africa. As we drove back to Cotonou, I was quiet all the while and sad about how human beings were treated like a piece of livestock or commodity and how a Christian missionary with the message of salvation could be a slave peddler or Wall Street slave stock broker.

With time we will come to know all that is hidden….