If you are African and you live in the diaspora, far and away from home and family, you are probably no stranger to sporadic feelings of nostalgia and a longing for the land of your birth.

Well it might help you feel better to know that your emotions are valid, because guess what? Even the early Homo sapiens, crude and primitive in character, probably couldn’t help feeling the same way too.

Our knowledge of early human migration is the result of the study of early human fossils. Prevailing hypothesis suggests that the some of our Homo sapiens ventured out of Africa about 100,000 years ago into what is today known as Europe.

They were perhaps overcome by deep feelings of wanderlust or it was just down to sheer self-preservation.

Whatever the case, some of our early human ancestors apparently took a look beyond the horizon where they lived and wondered if the vista spread out in front of them held any new opportunities. They set out to explore and see for themselves.

Their journey out of Africa had always been considered a one way trip – until recently.  New evidence published in Scientific Reports suggests that some 45,000 years ago, a couple of our primitive ancestors may have completed the round trip and found their way back home. 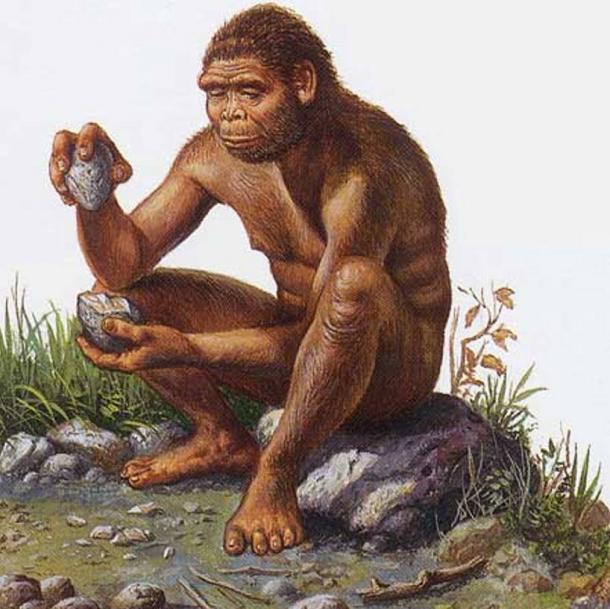 illustration of the species homo habilis (genus homo between 2.1 and 1.5 million years ago shaping a tool by “knapping” photo: Vassar.edu

According to researchers from the Basque Country, analysing the DNA from the fossilised teeth of a 35,000-year-old female found in a Romanian cave provides genetic proof of this back migration.

The research hints that they may have headed back home during the last ice age. Well, It must have been freezing cold!

Could they have returned because of the extreme weather or was it because they had missed the African sunshine?

Whatever it was, the evidence implies that they most likely made the trip back using nearly the same route they had taken across; through the Levant and the Horn of Africa.

So you see it’s okay if you feel a little homesick now and again. Who doesn’t?

For more detailed reading on the report, see; “Europeans” returned to Africa during the ice age