Originally, Women’s Equality signified the right of women in the United States to gain the constitutional right to vote in 1920.  In 1970, there was a Women’s Strike for Equality. As the fight for women’s rights continued, in 1973, New York Congresswoman Bella Abzug instigated an Act that would be signed by Congress stating that August 26 would be designated as Women’s Equality Day. This would encompass all of the efforts by suffragists to exhibit woman’s contributions to American society on a broad scale.

Nevertheless, the women’s rights movement was not synonymous with the equality of black women.

As Susan B. Anthony, a pivotal women’s suffragist proclaimed, “I will cut off this right arm of mine before I will ever work or demand the ballot for the Negro and not the woman.” Another clear indication that the fair treatment of black women was low on the totem pole of priorities for whites.

Nonetheless, many black women such as Anna Julia Cooper, Ida B. Wells-Barnett and Sojourner Truth paved the way for the black women’s voice to be heard loud and clear. 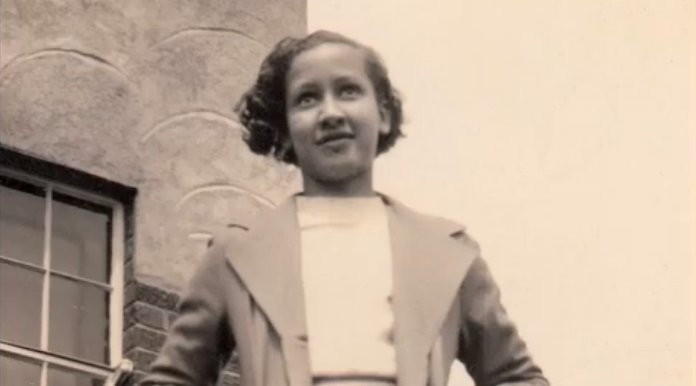 Katherine Johnson in her youth…Did you know

Yesterday marked the momentous 100th birthday of Katherine Coleman Goble Johnson, the aerospace technologist and physicist whose calculations of orbital mechanics were pivotal in formulating emergency return paths for astronauts, the formation of the Space Shuttle Program and completing missions to Mars.

Johnson’s work gained worldwide attention when her life was chronicled in the film Hidden Figures, with actress Taraji P. Henson portraying her likeness.

Let’s delve more into the phenomenal life of Johnson.

Johnson was born in White Sulphur Springs, West Virginia. Johnson was a child prodigy, entering a specialized high school program on the campus of West Virginia State College at the age of 10. The county she was raised in did not provide an education for black students beyond the eighth grade.

Johnson accepted a teaching position at a public school in Marion, Virginia.

In 1939 after marrying her first husband, James Goble and becoming pregnant, Johnson quit the graduate math program at West Virginia University. At the time, Johnson was the only African-American woman to integrate into the university after the Supreme Court ruling Missouri ex rel. Gaines v. Canada (1938).  The ruling stated that black students were to be afforded the same advanced educational opportunities as their white counterparts. 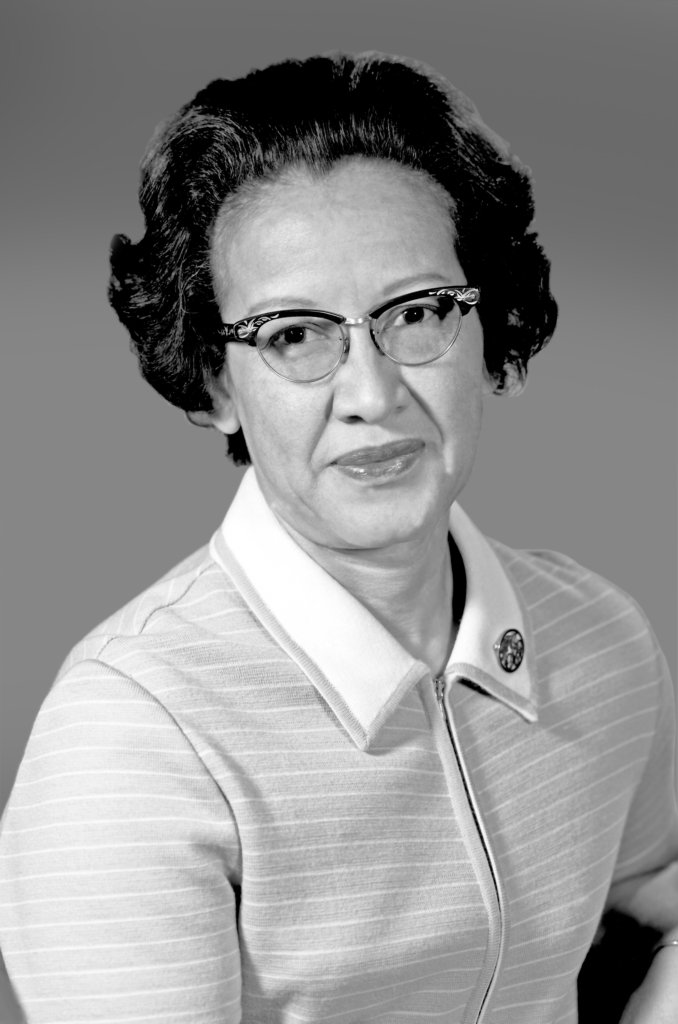 Johnson during her time at NASA…NASA

Johnson decided to explore a career in research mathematics. It was a difficult field for African-Americans, let alone African-American women to traverse through, however, after hearing from a family member that the National Advisory Committee for Aeronautics (NACA) was hiring mathematicians she stayed the course.

Johnson was offered a position in 1953. NACA would be superseded in 1958 by the National Aeronautics and Space Administration (NASA).

In 1956, Johnson’s first husband died due to an inoperable brain tumor. They had three daughters, Constance, Joylette and Katherine.

In 1959, Johnson married James A. Johnson, an Army officer and veteran of the Korean War.

From 1953 to 1958, Johnson computed complex mathematical formulas manually all the while experiencing racial and gender segregation.

At the time, Johnson recalled that no woman had her name placed on a report she completed, herself and the black women who were mathematicians worked under the supervision of white engineers, the computers they worked on were labeled “colored computers.”

Johnson recalled, “We needed to be assertive as women in those days – assertive and aggressive – and the degree to which we had to be that way depended on where you were. I had to be. In the early days of NASA, women were not allowed to put their names on the reports – no woman in my division had had her name on a report. I was working with Ted Skopinski and he wanted to leave and go to Houston … but Henry Pearson, our supervisor – he was not a fan of women – kept pushing him to finish the report we were working on. Finally, Ted told him, “Katherine should finish the report, she’s done most of the work anyway.” So Ted left Pearson with no choice; I finished the report and my name went on it, and that was the first time a woman in our division had her name on something.” 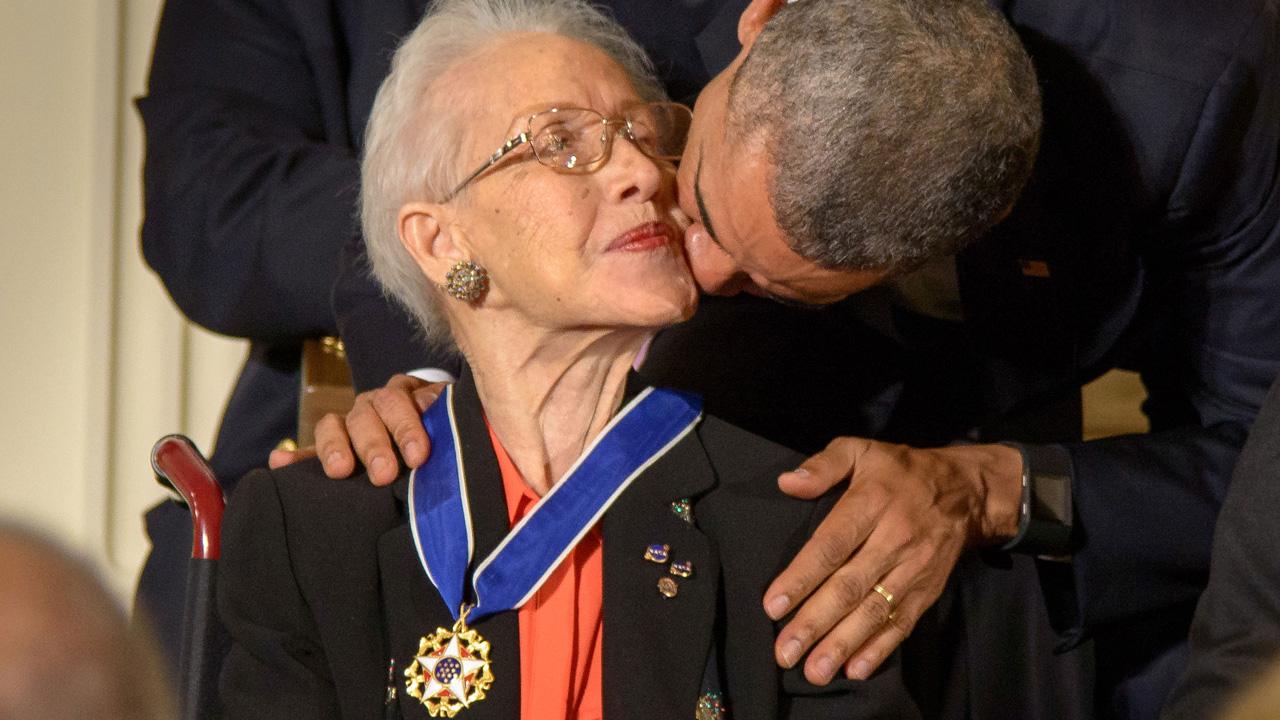 Johnson in 2015, as she received a kiss and the Presidential Medal of Honor from President Barack Obama…Science

During her 28-year career, Johnson chartered the trajectory for Alan Shepard, the first American in space. Johnson also calculated the launch opening for the 1961 mission to Mars, verified the calculations for digital computers before they were used for the first time, her calculations were used in the 1969 Apollo 11 and Apollo 13 moon missions and was enlisted to ensure that Shepard’s Freedom 7 capsule would be recovered quickly after landing.

Throughout her career, Johnson co-authored 26 scientific papers, has been lauded as an African-American woman pioneer in STEM, has been ranked among African-American’s in science and technology and been bestowed with the Presidential Medal of Freedom by former President Barack Obama.

On May 5, 2016, the Katherine G. Johnson Computational was unveiled at the Langley Research in Hampton, Virginia in honor of Johnson. The center officially opened its doors on September 22, 2017. Johnson was also given a Silver Snoopy Award, usually given to those “who have made outstanding contributions to flight safety and mission success.”

Johnson was honored by the West Virginia State University a day before her birthday with a statue and scholarship dedicated to her. Hundreds of people including 75 of Johnson’s children, grandchildren and great-grandchildren attended the event.

Johnson resides in Hampton, Virginia with her husband. The couple has six grandchildren and 11 great-grandchildren.  She continues to inspire others by encouraging students and her grandchildren to pursue STEM-related careers.