Seven representatives of the Kenya Medical Practitioners Pharmacists and Dentists’ Union (KMPDU) were released from jail Wednesday by Kenya’s Court of Appeal, after being sentenced to a month in jail by a federal High Court judge.

On Monday, a Kenyan judge ordered officials of the medical workers’ union to be held in jail as the doctor’s strike in public hospitals entered its 10th week, reports Reuters.

Justice Hellen Wasilwa of the Federal High court jailed the seven medical union executives for “contempt of court,” following their refusal to obey a court injunction to call off the strike.

Justice Wasilwa said the union officials had provided no reason for their punishment to be deferred. “This court decides to resume its order sentencing the applicants to a one-month jail term,” she said. 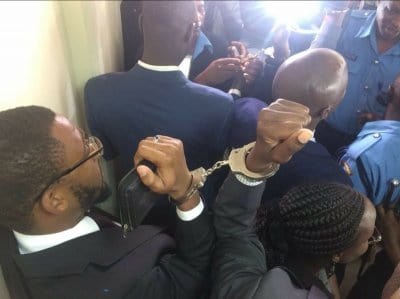 The medical union executives were led away in handcuffs. Photo credit: IB Times

After the ruling, doctors wearing white gowns and surgical caps blew whistles and chanted angrily outside the court house as the union executives — in handcuffs — were driven to jail with truckloads of riot police taking up positions in the area.

By midweek, though, Appellate Judge Wanjiru Karanja overruled Justice Wasilwa’s decision, saying, “The applicants, respondents and interested parties undertake to resume negotiations forthwith, with a view to resolving the outstanding issues, in order to restore normalcy in the public health sector.”

The doctors’ strike has crippled public health delivery in Kenya, resulting in health crises that have led to dozens of deaths, with many more suffering disabilities and pain because of lack of treatment.

The strike has become a hot topic as Kenya prepares to hold presidential elections later in August. President Jomo Kenyatta, who is seeking re-election, has urged the striking doctors to return to work without offering any major concession to the medical union.

His government had also threatened to hire doctors from Cuba and India if the Kenyan doctors fail to return to work.

The doctors insist, though, that they will not return to work until the government honors the terms of a collective bargaining agreement reached in 2013, which promised to improve work conditions; implement a 300 percent pay increase; employ more doctors; and increase funding for research, drugs, and equipment in public hospitals.