In the capital city of Middle Eastern nation Kuwait, African women hailing from Sierra Leone, Cameroon, Kenya, and Ethiopia, are being duped into lives of servitude, after they are promised nursing and hotel jobs abroad, according to the Guardian.

Explaining the selection process for jobs on arrival, one worker who used to work as a nurse in her homeland of Sierra Leone explained, “[The agents] took us to their offices and people would come to look at us. If they said, ‘I want this person,’ they took you to their house.”

And according to a number of “housemaids” that were interviewed, once the agents made their profit off of the “sale” of a woman, they usually never heard from or saw these agents again.

In fact, the “lives” waiting for them at these gated mansions are ones where they are expected to work 22 hours a day.

Twenty-four-year-old Adama (pictured), had the misfortune of being “employed” by a family in Kuwait City.

According to Adama, in addition to never being compensated during her time at the residence, her employer “deliberately” spilled hot oil on her as she cooked.

“You have to work 24 hours [with] no day off. You can never leave the house…. You are not allowed to use mobile phones. These people are not good.”

And indeed, in Kuwait, where 90 percent of the population reportedly employ house help, once someone is “purchased,” the perception is that they own the maid and can treat them however they wish.

This mistreatment of house help, though, is also supported by the government, since there are no laws on the books protecting domestic labor.

Migrant Workers Kuwait Trade Union Federation Head Abdul Alghanim explains, “There has been a draft law for domestic workers for a long time, but it has not been passed by parliament. In my opinion the government and parliament are not interested in taking serious steps for that.”

Once in Kuwait, women often completely disappear from view. Isolated in private households and excluded from Kuwait’s labour rights legislation, they are extremely vulnerable to abuse and exploitation.

Once employed as domestic workers in Kuwait, women find it difficult to leave if they suffer abuse. Under Kuwait’s kafala sponsorship system, domestic workers are not allowed to leave or change jobs without their employers’ permission. With their residency status also tied to their employer, if they run away they become “illegal.”

Not surprisingly, after the burning, Adama was returned to her agent.

The agent reportedly wasted no time trying to place her in another home, but if Adama thought her troubles were coming to an end, she was sadly mistaken.

According to Adama, the agent locked her in a house for three days without food.

And while Adama was able to escape from the house, yet another prison awaited her.

Adama fled to her embassy, which then placed her in a runaway maids shelter, with about 300 other women, so she could be deported.

At the shelter, women find themselves in another type of prison. Under Kuwaiti law, employers are obliged to report any worker who has “absconded” from a private home. Their residency permit is then cancelled and orders are issued to detain and deport them. While the facility is immaculate, with a large outdoor area and spotless corridors, those sheltering here are not allowed to go outside or use mobile phones. They can contact their families, but only on the shelter’s phone, and only at weekends. Women can be trapped here for months, if not years.

Many of those that have escaped this life of servitude have filed official complaints to their respective embassies. In fact, in 2009 alone, according to Human Rights Watch, Kuwait has received more than 10,000 complaints from domestics, including “nonpayment of wages; withholding of passports; excessively long working hours without rest; and physical, sexual, and psychological abuse.”

The complaints prompted Sierra Leone, Indonesia, and Nepal, for example, to ban their women from being employed as house help in Kuwait.

But the ban hasn’t stopped the flow of women being lured in to the country after applying for what looks to be legitimate work through agents on the Internet. 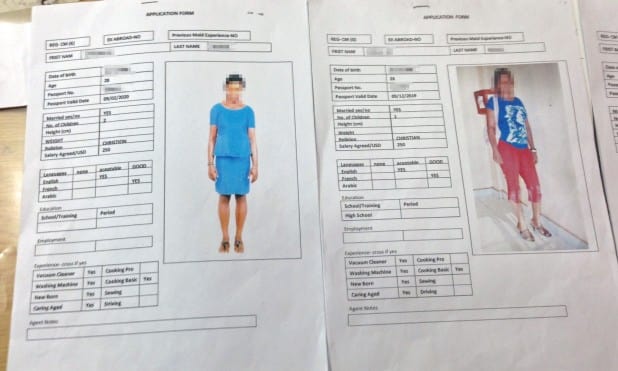 In fact, after the Sierra Leone Embassy did their own investigation in to the situation of housemaids in the city, they found agents still “selling” about 100 Sierra Leonean women for work (pictured).

Saidu Bangura, the cultural attache at the Sierra Leone embassy in Kuwait, says, “It’s a total deception. Recruitment agents in Kuwait contact agents in Sierra Leone through the Internet and ask them to recruit workers. I want to appeal to these women not to believe anyone who wants them to come to Kuwait. It’s only going to bring punishment and distress.”

Alima, another abused housemaid, currently lives at the shelter and hasn’t been allowed to go home since she found out that she was pregnant.

Alima gave birth to her baby just a few weeks ago.

A few weeks after arriving in the country, Alima discovered she was pregnant, but her agent refused to send her home unless her family sent money for the flight, which they could not afford to do.

And so Alima gave birth to her son Richie alone in a Kuwaiti hospital. “I just want to go home,” she sobbed, clutching her three-week-old boy. “I have suffered too much here.”