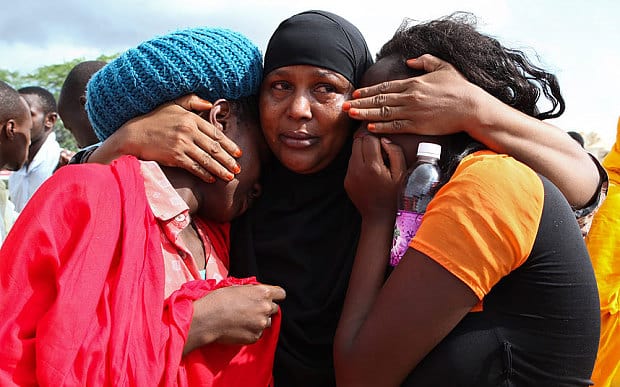 Some of the Garissa University students who were rescued, comfort each other at the Garissa

A day after Somali-grown terrorist group al-Shabab stormed northeastern Kenya’s Garissa University and shot indiscriminately at students, security, and staff, the death toll and injuries have been tallied with grief and anxiety still palpable in the air, according to the BBC.

RELATED: EX-AL-SHABAAB FIGHTER SAYS DAYS ARE OVER FOR TERRORIST GROUP

On Thursday, al-Shabab killed at least 147 people, after they descended on the campus while many students were still sleeping at dawn.

Reportedly screaming, “We are al-Shabab,” the terrorists killed two security guards and then began shooting students as they slept in their dormitories.

The militants also reportedly singled out Christians and then killed them; a sniper also killed more than 20 security officers.

Student Eric Wekesa describes the harrowing experience, “What I managed to hear from them is ‘we came to kill or finally be killed.’ That’s what they said.”

In order to save his life, Wekesa reportedly locked himself in his room before he was able to escape.

Meanwhile, an unidentified second-year student had to hide in a wardrobe for 10 hours before being taken to a military facility.

The BBC reports on her father’s desperate search for her:

Her father drove for four hours from Nairobi when he was unable to get hold of her during the siege. He told the BBC about his desperate search for his daughter at the mortuary, hospital and military airstrip. Late in the afternoon, when he had almost given up hope, he got a text: “Dad call me”. They have yet to be reunited but his relief is palpable.

The daughter is currently receiving counseling with 500 other survivors at the aforementioned military facility.

After hours of terror, the five gunman were finally cornered in a dormitory. Kenyan security forces were only able to apprehend one of the gunman, though, since the other four detonated bombs in their suicide vests.

Al-Shabab has been terrorizing Kenya since the country decided to involve its troops in the fight against them in Somalia in 2011.

One of their most-vicious attacks took place at Westgate Shopping Mall in Nairobi, where they killed 67 civilians and wounded 175 in September 2013. 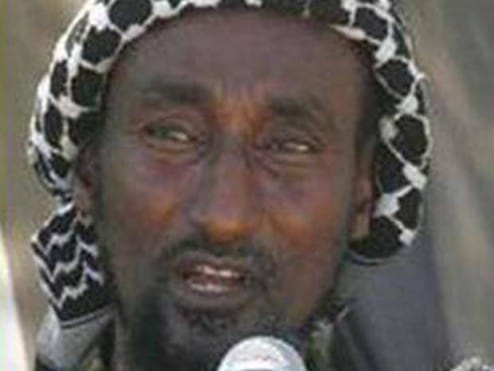 (pictured); the government is offering a $53,000 reward for his capture.

Of the massacre, Kenyan President Uhuru Kenyatta says he is implementing “urgent steps” to recruit more police and start their training as soon as possible.

“We have suffered unnecessarily due to shortage of security personnel,” Kenyatta said.

Meanwhile, students are said to be returning home Friday and burials for Muslim students are poised to begin.

“I am sure we will defeat these terrorists. Kenya is a brotherly nation that has extended its support to us, which the terrorists don’t want. The aim of the terrorists is to dispirit us, but they will not succeed in that.”