Rwandan Professor Leopold Munyakazi has been sentenced to life in prison, after he was found guilty of playing a key role in the 1994 genocide that claimed at least 800,000 lives.

According to Emmanuel Itamwa, the spokesman of the Rwandan court that delivered the sentence on Friday, Prof. Munyakazi will remain under solitary confinement in the district of Muhanga, southern Rwanda, for the rest of his life, according to News24.

The distinguished linguist was first arrested by Rwandan authorities a few months after the 1994 bloodbath on suspicion of being responsible for the genocide but was later released for lack of evidence.

He fled Rwanda in 2004 and sought refuge in the United States, where he taught French at Goucher College in Baltimore until he was suspended in 2008 following his indictment by the Rwandan government.

He is alleged to have made statements while teaching French at Montclair State University in New Jersey to suggest that there was no genocide in Rwanda.

“I refer to it as civil war, not genocide; it was about political power,” Munyakazi allegedly said.

“Ethnicity is not really understood about Rwanda; in Rwanda, there are no tribes. There are social groups, they are one single people.”

He is also alleged to have repeated these remarks in Goucher College two years later, insisting that the Rwandan massacre was fratricide, brother against brother.

Many Rwandans were offended by his statements, labeling him a “genocide denier,” a term that was commonly used in Germany during and after the Holocaust.

A month after his speech at Delaware, the Rwandan government issued an international arrest warrant charging him with genocide, conspiracy to commit genocide, and negation of genocide.

He has repeatedly denied the charges.

Munyakazi was deported to Rwanda in September 2016, when he lost his last appeal to return to his family in Baltimore county. 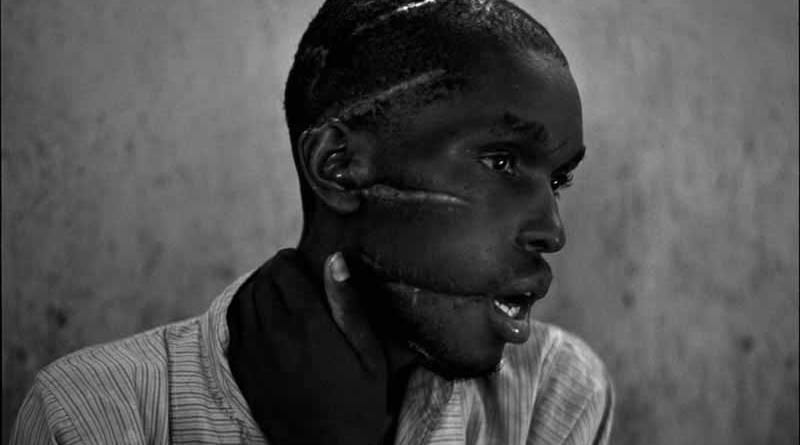 A Hutu man who did not support the genocide had been imprisoned in the concentration camp, starved and attacked with machetes. He managed to survive after he was freed and was placed in the care of the Red Cross, Rwanda, 1994. Photo credit: VNews

With almost an entire ethnic community wiped out, the Rwandan genocide remains the deadliest mass murder in African history.

The mass slaughter started on April 7, 1994, after an airplane carrying the then-President of Rwanda Juvénal Habyarimana, a Hutu, and his Burundian counterpart Cyprien Ntaryamira was shot down on its descent in to Kigali.

All roads were blocked to prevent Tutsis and moderate Hutus from fleeing. The ensuing bloodbath lasted for 100 days, leaving close to 1 million people dead.

It is estimated that 70 percent of those who died were Tutsis. The mass slaughter ended in mid-July 1994, after the Tutsi-backed and heavily armed Rwandan Patriotic Front (RPF), led by the current President Paul Kagame, took control of the country.

With a new Tutsi government in place, millions of Hutus were forced to flee to neighboring countries, such as Burundi, Uganda, and the Democratic Republic of Congo.