The Prince of Wales and the Duchess of Cornwall are currently in Ghana for a five-day visit.

Prince Charles and his wife, Camilla, have embarked on a three-country tour through Gambia, Ghana, and Nigeria as part of an effort by the crown to strengthen the bonds between the country and the Commonwealth, including “celebrating some shared values and cultures between the United Kingdom and these countries, as well as throwing the searchlight on a number of important commitments”.

As I write this post, the Prince and Duchess have already met the President, Nana Akufo-Addo.

They also interacted with Ghanaian dignitaries and other stakeholders at a star-studded party held in their honor by the British High Commissioner on Friday night. The Prince also spent Saturday at Christiansburg Castle in Osu, which was once a British-owned slave fort, and in a sad twist of fate, served as the seat of Ghana’s government for decades.

Today, he and his wife will join the President for a Thanksgiving Service at Ridge Church in Accra, head to Kumasi to visit the Asante King, attend a Public Lecture at the Accra International Conference Centre then a State Banquet held in his honour by President Akufo-Addo, before leaving on Tuesday.

The Prince has yet to address the larger Ghanaian public but whatever he says will be an important indication of British interest in Ghana, especially as it tries to redefine itself post-Brexit.

The Prince aside, what is worth investigating, with some urgency, is this question of the ‘Ghanaian response’ to the Royal visit.

There have been some well-versed critiques about our over exuberance about this royal visit, a point clearly articulated by Ghanaian artist Fuse ODG, in the video below.

I’m genuinely confused about the fuss that’s being made about Prince Charles visit to Ghana.. maybe someone can explain to me ??!??‍♂️ #BraFie #NewAfricaNation #RoyalVisitGhana pic.twitter.com/dlgARa0EKA

I am more concerned about the effort of some Ghanaians in trying to erase or dismiss an important aspect of Ghana’s relationship with Britain, at such an important time.

Ghana distorts its history to welcome the Prince

Prior to the Prince’s visit, Ghana’s president, Nana Akuffo Addo, paid glowing tributes to the Prince, telling the media that “[he] welcomes the Prince of Wales very warmly back to Ghana, a country he knows well. He is an old friend of our country and we look forward to receiving him…”

This ‘peachy’ message of friendship continues on a billboard spotted around town that reads, “shared history, shared future” and boasts an image of Prince Charles and President Akufo-Addo, and the flags of both countries. 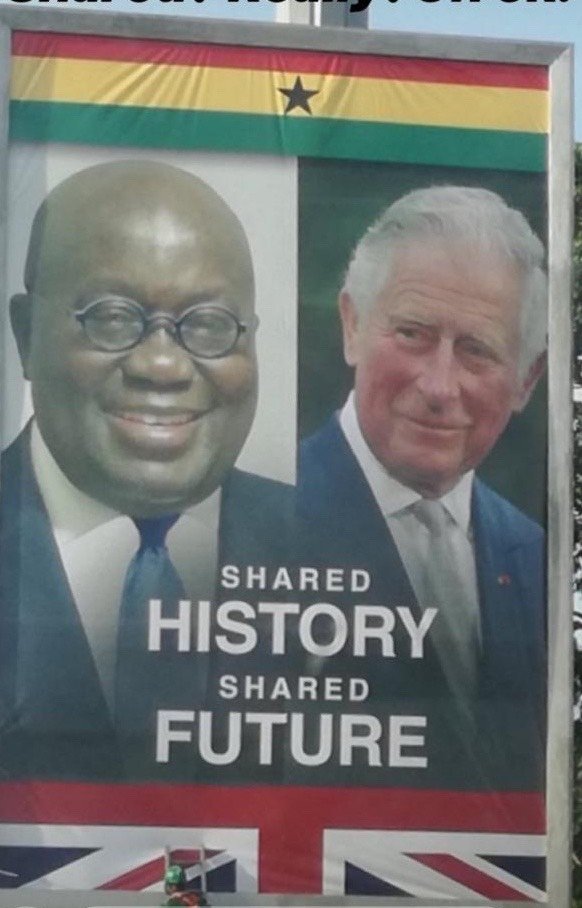 We cannot debate the merits of a shared future because it is yet to be seen. But a shared history? Really? Such a statement is a travesty to our actual history for two main reasons.

FIRST, there is a Ghanaian history that did not know of the British, in any way, that we must consistently acknowledge and teach our children, both directly in school, and in such social “learning moments”.

As psychiatrist and revolutionary, Frantz Fanon aptly describes it, claiming a national history that is not tied to colonialism or a colonial master is not frivolous. It is an important psychological exercise.

“The claim to a national culture in the past does not only rehabilitate that nation and serve as a justification for the hope of a future national culture. In the sphere of psycho-affective equilibrium it is responsible for an important change in the native. Perhaps we haven’t sufficiently demonstrated that colonialism is not satisfied merely with holding a people in its grip and emptying the native’s brain of all form and content. By a kind of perverted logic, it turns to the past of the oppressed people, and distorts, disfigures, and destroys it. This work of devaluing pre-colonial history takes on a dialectical significance today,” he says.

Moreover, there is a long part of Ghanaian history that has been especially resistant to “sharing” itself with the British blindly, without caveat. It is a history we all know well – from the Anglo-Asante Wars fought between 1824 and 1901, to the Independence struggle, and long after, even in our present day.

Are we not going to acknowledge the crowns brutal exploit through slavery, colonization, and decolonization? Are we not going to remember the sacrifices made on our behalf during the span of that ‘shared’ history? Can we tell the full story at all times and not just the part that is convenient or expedient for the moment?

For a government that has consistently propagated an admirable “Ghana Beyond Aid” agenda, why distort or water down that a strong call of self-determination through a false sense of closeness the crown?

We can be warm and open to others without lying and compromising our story.

Remember ‘When We Traded As Equals’

Earlier this year, I wrote a piece called “When We Traded As Equals” where I explored Godfried Donkor’s large mural, titled The First Day of The Yam Custom (2017). The piece takes from one British officer, Bowdich’s account of a mission trip where he and other British officers were sent to “assess the gains the Royal African Company can expect from a grand scale intervention into Ghana’s hinterland” in 1817. 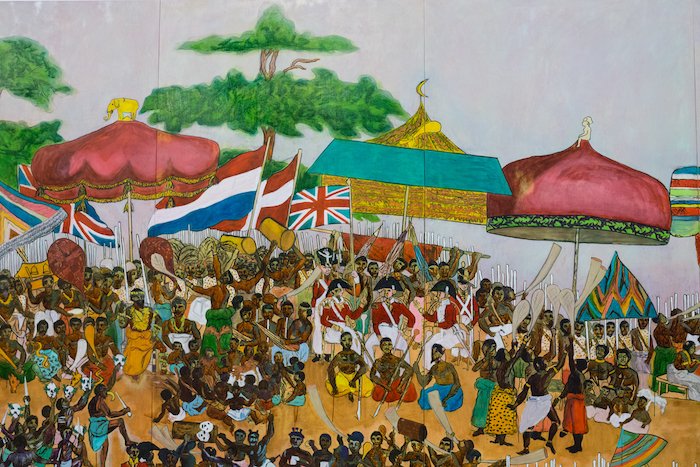 1817 is a critical time – the slave trade has ended and it is before the colonial period. It is a time of increased European competition to gain the favour of the kings and chiefs of the Gulf’s coastal societies. Britain’s ambitious vision is therefore masked by an official report to “make a peace and trade treaty with the Asante, while also learning more about their culture and custom”.

At the First Day of Yam Custom of 1817, Bowdich describes the Asantehene as being blanketed in gold. It is this evidence of wealth and resources in the region that “triggers British appetite for Ghana” and perhaps a greed that manifests in colonialism right after that period.

Our kids are watching

Today, we face some variant form of this reality. At a time such as this, with increasing globalization and rapid technological change, we are presented with an opportunity – of open markets, cross-border trade, pro-immigration et cetera, especially as the UK exits the European Union and seeks to strengthen its trade ties with emerging markets. The implications of this relation for our growing economy is tremendous.

Yet, in our excitement for strengthened ties, we should not forget how we once lost our autonomy. No, it was not through immediate or direct force and control but slowly, through convenient allegiances with the British, pacts of understanding that would later fail, false proximity, and value exchanges that often left us at odds with who we are.

Today, our kids are watching us slowly make similar concessions, whose implications we will not know until decades, if not centuries later. But it is not too late. In the next few days, let us correct that billboard, if not on paper, then in all of our minds.