It was with mixed reactions that Liberia and Africa sent farewell messages to the first democratically elected African female President Ellen Johnson Sirleaf.

Sirleaf was elected the President of Liberia on this day in 2006, following 14 years of a deadly civil war during the reign of the now incarcerated former President Charles Taylor, who was ousted by rebels in 2003.

Over the 12-year period she had been in office, the 78-year-old of head of state received numerous accolades and condemnations in almost equal measure. There are those who believe she had achieved many great things for her country and there are those who criticize her for not living up to their expectations.

Journey to the Presidency and Achievements

Born in Liberia’s capital Monrovia in October 1938, Ellen Eugenia Johnson has endured a great deal of challenges, both as a young girl and a career woman. At 17 years of age, immediately after her secondary education, Sirleaf got married to James Sirleaf, then a young agronomist, with whom she had four children.

Aside from taking care of her family, Sirleaf worked as a local bookkeeper for a vehicle repair shop in Monrovia in order to supplement the family’s income. She later left her four children under the care of their grandparents to accompany her husband to the U.S., where he was pursuing a graduate degree in Agriculture.

While in the U.S., Sirleaf studied accounting at the Madison College of Business, and upon their return to Liberia, she got a job at the Treasury Department, which was then referred to as the Ministry of Finance. But the breakthrough in her career came with its fair share of challenges as it put a strain on her marriage, forcing the couple to separate.

After the divorce, Sirleaf went back to the United States to pursue a bachelor’s degree in economics and a master’s degree in public administration. In 1972, she joined the Liberian government as an Assistant Minister in the Ministry of Finance under President William Tolbert. 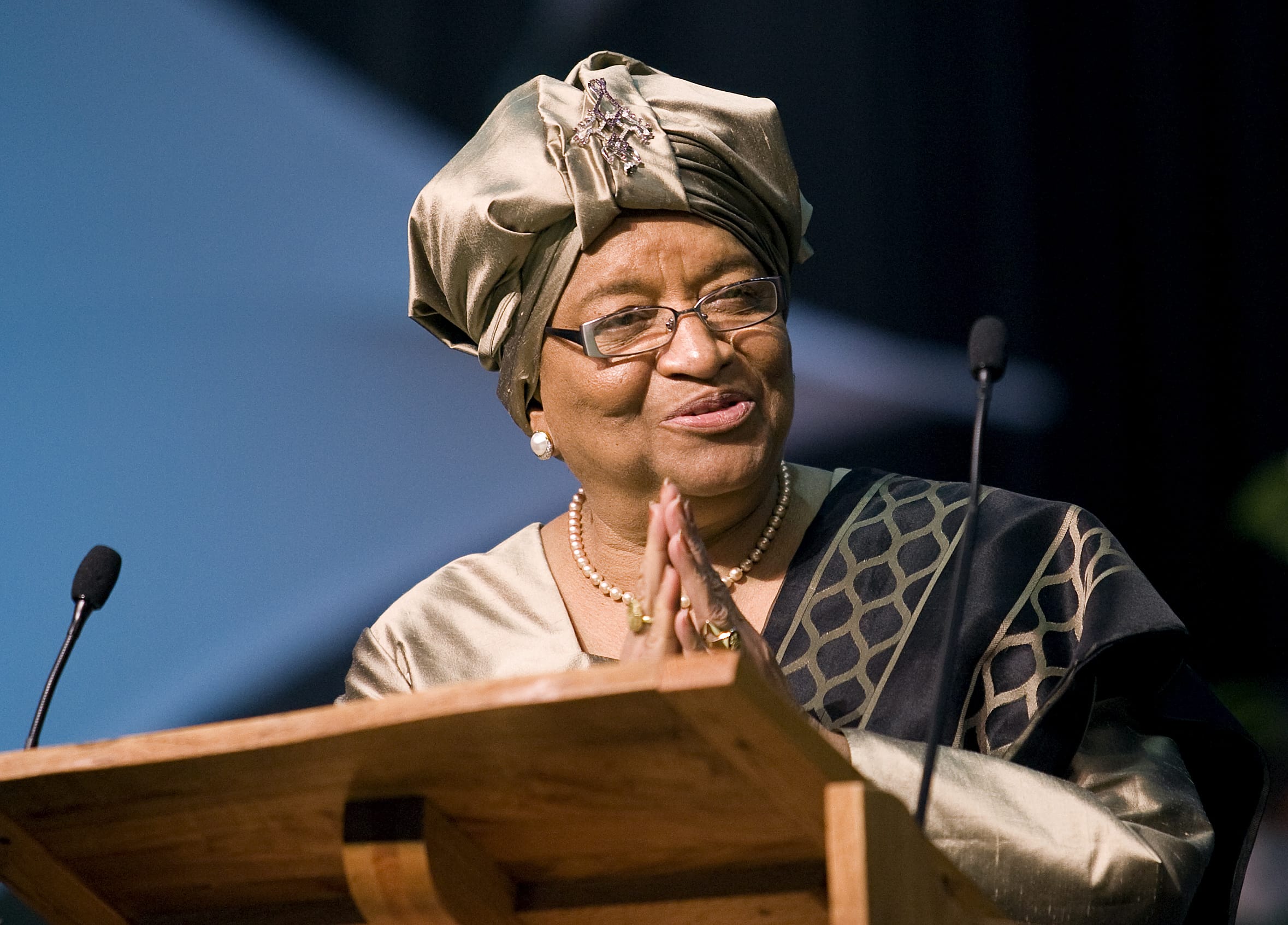 She would later replace her boss at the treasury following her appointment by President Tolbert to head the Ministry. This made her the first Liberian woman to head the Ministry of Finance. But in the 1980s, Sirleaf was forced to flee Liberia after the execution of Tolbert and other top government officials by a section of non-commissioned military officers.

While in exile in the U.S., she worked for the World Bank as a senior loan officer, and later moved to Kenya to work as the vice president of Citicorp. During the 1985 elections in Liberia, Sirleaf, who was running for the vice presidency, was arrested and sentenced to ten years in prison for criticizing President Samuel Doe’s corrupt regime. But the international community forced Doe to release her without conditions shortly after she was imprisoned.

After many years of fighting for democracy in Liberia, Sirleaf became the first woman to run the United Nations Development Programme (UNDP) in Africa in 1992. After six years at the UNDP, she returned to Liberia to pursue her ambitions to become the next head of state.

In 1997, she unsuccessfully ran against President Charles Taylor, whose regime was accused of committing all manner of atrocities against its own citizens. At one point, Taylor threatened to kill Sirleaf for criticizing his administration. So, she had to flee the country to the neighboring Ivory Coast.

Following the forceful removal of President Taylor from office in 2003, a fresh election was held in December 2005, in which Sirleaf, who was running for president on a Unity Party ticket, emerged second in the first round of voting, but won assertively after the runoff.

She was sworn in as the 24th President of Liberia in January 2006, making her the first democratically elected female President in Africa.

Immediately after her swearing-in ceremony, Sirleaf embarked on a mission to repair the damage caused by years of heavy fighting and totalitarianism in Liberia. Despite the country’s meagre resources, poor infrastructure, and recurring disease outbreaks like Ebola, Sirleaf managed to stabilize the country’s economy by negotiating with international trade partners to lift their embargos against the West African nation. 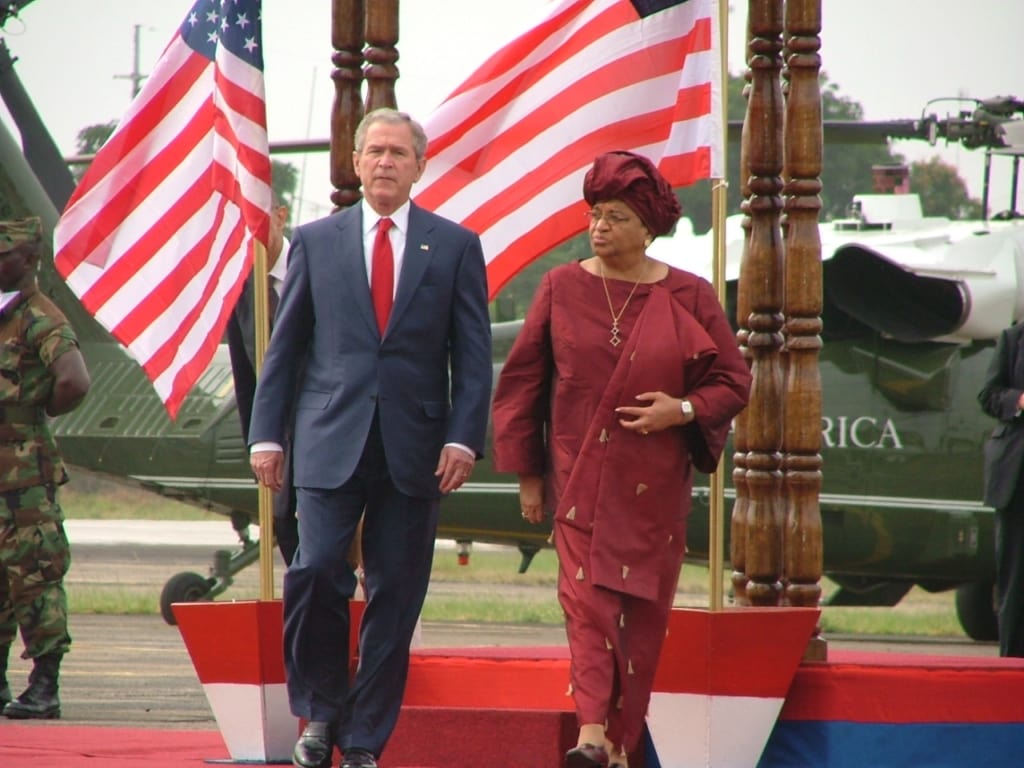 She also managed to convince foreign lenders to pardon Liberia of some of the overwhelming external debts.

Through executive orders, Sirleaf managed to push for the establishment of free, universal elementary education and equal rights for women in the country. Additionally, she managed to complete more than 800 miles of new roads and attracted a significant number of foreign investments in the mining, forestry and agricultural sectors during her presidency.

Many people have also commended her for her efforts to reconcile the country and prevent a return to war. Under her reign, Liberia has enjoyed relative peace and stability, which has given foreign investors enough confidence to invest in the country.

Most critics of President Sirleaf often accused her of not giving women rights enough attention. They specifically blame her for failing to stop the spread of Female Genital Mutilation (FGM), whose ban was removed from the new law on domestic violence in July 2017.

The new law had listed FGM as a criminal offence, together with sexual violence, emotional abuse and physical violence against women. Ironically, the amendment happened in the wake of numerous promises by President Sirleaf to introduce laws that would criminalize FGM.

The iconic West African leader was also criticized for doing little to end rampant corruption and nepotism in Liberia. She is often accused of employing people of questionable character and whose main aim is to enrich themselves.

But be that as it may, many Liberians are optimistic that their new president, George Weah, will carry on with Sirleaf’s progressive agenda and ensure Liberia, the oldest African republic, is no longer an international mockery and an example of world’s poorest countries.